"The brands whose clothes I sew should be part of the solution. They can't sit back while we lose our income.” 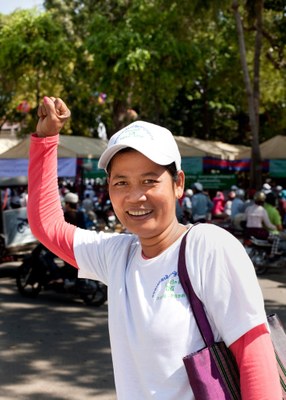 “In 2009 we had a problem with the ventilation of the factory. There were no fans and it was hard to breathe. I went to talk to the floor manager and when that didn't work I wrote a letter to the manager, with help of the union coalition C.CAWDU. After some negotiation the owner finally placed some fans. And in all it took two months.

During the conflict at SL Garment I acted as the spokesperson for the groups of workers demanding their rights. I would stand in the crowd, in front of the factory, with a megaphone, trying to neutralise the crowd and talk to them. When the police tried to stop the workers I talked to the cops.

One day we decided to go to the Prime Minister's house to demand a solution. The police was in full force and I was talking over the megaphone again. A few of them came up to us; it was clear there were going to beat us up so I started running. I lost one shoe while running away but I didn't care. I didn't know if they were going to use plastic bullets again, so I just kept running.

Maybe they came up with a solution now and the violence is over, but I'm not very happy.

I still need to receive the bonuses that I worked for. I want the owner to pay for that.

The brands whose clothes I sew should be part of the solution. They can't sit back while we lose our income.”