"We've been worried for the workers. And they were also targeting the union: I received death threats and insults"

by paul — last modified 2014-05-26 15:05
an interview with Ath Thorn, union leader whose union has come under attack repeatedly by the government and factory owners. 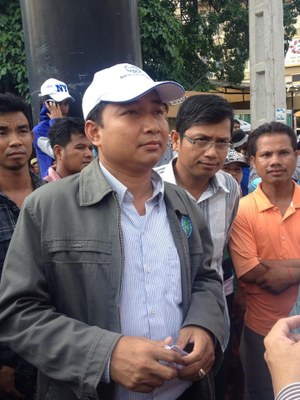 Ath Thorn is the president of the Coalition of Cambodian Apparel Workers Democratic Union (C.CAWDU)

“During the strike our office was blocked by 200 workers, who were paid by the owner to do so. We couldn't enter or leave the building.

One woman who went to get some water was hit by a Taser (electroshock gun) from a Chinese supervisor and fainted. When workers tried to help her they were hit by stones thrown by the supervisor and a body guard from the factory owner.

One worker clashed with a security guard at the factory presmisses during one of the violent periods of the strikes. The guard took him to the director's office, where they kept him and beat him up. It took the worker a week in hospital to recover.

Security guards and supervisors threw stones and bottles, shot with plastic bullets and shot marbles with slingshots at the crowd. About ten people were severely injured and had to be taken to hospital.

We've been worried for the workers. And they were also targeting the union: I received death threats and insults. They said they would cut my eyes out.

After the agreement in December 2013 the workers went back to work. Some of the workers could not go back to their previous positions, because the factory illegally employed other workers.

The factory owner should implement the agreement, should pay the additional fees they are legally obliged to pay to the workers and should not continue lawsuits against activists and union leaders.”