10 years after more than 250 people died in the Ali Enterprises fire in Pakistan – the deadliest factory fire ever in the global garment industry – deadly safety violations persist in factories. A new report by Clean Clothes Campaign reveals these brands' attempts to delay the expansion of the International Accord for Health and Safety in the Textile and Garment Industry. 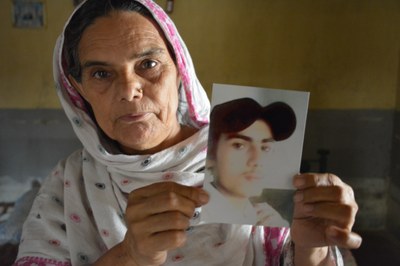 September 11, 2022, marks 10 years since the catastrophic Ali Enterprises fire in Baldia town, Karachi, where more than 250 garment workers lost their lives due to numerous serious safety violations in the factory. With still no binding agreement in place between apparel brands and labour unions to keep workers safe, Pakistani garment and textile workers today remain in the exact same unsafe conditions that led to this horrific disaster a decade ago.

On this day, we stand in solidarity and mourn with the families of the victims and the survivors.

Clean Clothes Campaign and advocacy groups also stand united around the globe to draw attention to the ongoing safety issues in factories in Pakistan and publicly call out brands like H&M, C&A, Zara, and Bestseller that are purposely delaying the expansion of the Accord that would protect worker safety. It is abundantly clear that industry-led initiatives and self-audits have failed, and Ali Enterprises is just one example of this. The Ali Enterprises factory was certified by the well-known social audit company Rina Associates, which marked the factory as ‘safe’, only a few weeks before the devastating fire. The expansion of the Accord to Pakistan can ensure credible, independent inspections, remediation, safety trainings, and a complaint mechanism to keep workers safe.

To demonstrate the need for an independent and binding safety agreement in Pakistan, Clean Clothes Campaign has released data that shows recent incidents and ongoing safety hazards in these brands' supply chains, which could have been avoided or resolved by expanding the Accord to the country.

The report gives insight into frightening safety violations occurring within factories in Pakistan. Workers supplying C&A, H&M, and Bestseller reported exits being blocked in their factories. Workers at factories producing for H&M and Bestseller also reported witnessing explosions and being exposed to electrical discharge and harmful substances. Workers at Zara and H&M factories reported witnessing a fire in their factories. This is on top of public reports of gas leaks at an H&M factory. The majority of Pakistani workers surveyed for the report reported the absence of fire-rated stairwells and exits.

Although the Accord's senior staff have recommended the initiation of a programme in Pakistan, the brand representatives on the Steering Committee, including H&M, C&A, Inditex (Zara), and Bestseller have refused to join their labour counterparts in supporting initiation. The brand representatives have instead insisted on delay after delay, to the point where their posture suggests not caution, but willful obstruction.

We call on these brands to stop delaying the expansion process within the Accord Steering Committee. We urge them to, upon expanding the Accord, immediately start independent inspections of their factories in Pakistan.

Nasir Mansoor the General Secretary National Trade Union Federation states, “H&M, C&A, Bestseller, and Inditex will gladly profit from the efforts of garment workers in Pakistan – yet, when it comes to these workers’ safety, that’s never a top priority for these brands. Accord negotiations are not a game for workers in Pakistan; people’s lives are at stake. These brands must agree to expand the Accord to Pakistan now and extend the agreement beyond 2023.”

Saeeda Khatoon from the Ali Enterprises Factory Fire Affectees’ Association states, “In the past 18 months alone there have been over 30 serious safety incidents in garment and textile factories in Pakistan. Over a dozen people have died and more have been injured. These incidents could have been prevented and lives could have been saved if these brands had not purposely delayed expansion of the Accord to Pakistan. H&M, C&A, Bestseller, and Inditex have blood and lives on their hands.”

Ineke Zeldenrust of Clean Clothes Campaign remarks, “Clean Clothes Campaign’s incidents report paints a scary picture of worker safety in Pakistan. But what is even scarier is that we don’t know the true extent of the safety violations in factories. If brands were to stop obstructing progress and agree to allow the International Accord to implement independent factory inspections in Pakistan, we could start to understand the factory renovations and repairs that need to be done in order to protect worker safety.”