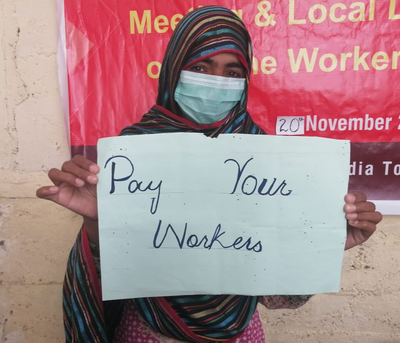 The study, undertaken by the New Conversations Project at the Cornell University School of Industrial and Labor Relations, lays out the key elements for a global severance fund, namely the need for it to be legally binding and to feature detailed obligations on brands and employers regarding the provision of severance. The fund should not replace the need for government social protection schemes, but rather incentivise the strengthening of such schemes. The findings support the proposal for an enforceable agreement put forward by the Pay Your Workers-Respect Labour Rights (Pay Your Workers) campaign, which is backed by dozens of garment worker unions in major apparel producing countries, as well as labour rights organisations including Clean Clothes Campaign and Worker Rights Consortium.

Both the Cornell research and the Pay Your Workers campaign emphasise the current lack of adequate social protection systems in major apparel production countries, and the responsibility brands have towards workers in their supply chains. Cases of severance theft have grown exponentially during the pandemic, with Worker Rights Consortium estimating that over half a billion dollars in severance has been stolen from garment workers since the pandemic began. Brand inaction has left millions of workers struggling to survive. The Cornell research confirms the need for brands to pay into a binding global severance fund to ensure that workers whose factories close or who are laid off en masse receive their full legally mandated severance when their employer fails to pay.

The proposed Pay Your Workers agreement has been popularised on social media under the #PayYourWorkers hashtag and the campaign has been endorsed by more than 260 civil society organisations. The proposal builds on the success of the Accord on Fire and Building Safety in Bangladesh, a binding agreement between apparel brands and two global union federations, IndustriALL and UNI. The Accord has proven to be the most successful model to address abuse in the apparel industry, and yet brands continue to resist signing a binding agreement to counter severance theft.

Kalpona Akter, President of the Bangladesh Garment & Industrial Workers Federation, an IndustriALL affiliate, said: "Many of the brands we have contacted are refusing to negotiate with us, deferring instead to their participation in the ILO-convened Call to Action. The Cornell report confirms that this call to action has not independently raised funds to alleviate the impact of the pandemic on garment workers. The Call to Action's fund is based on voluntary participation, without enforcement provisions, and without any obligation for the parties to contribute. It is not surprising that it has not delivered meaningful relief for garment workers."

"The Cornell study shows the vital need for the Pay Your Workers campaign, calling on brands to respond to the demands of unions to provide essential relief to garment workers during Covid-19 and a sustainable solution going forward by: negotiating a binding agreement to address workers' income loss during the pandemic; ensuring they receive severance if they are left jobless; and respecting freedom of association and collective bargaining rights," said Edgar Romney, Secretary-Treasurer of Workers United, a member of IndustriALL.

Information on the Pay Your Workers-Respect Labour Rights campaign: https://www.payyourworkers.org/faq

Further information on the binding agreement proposed by the Pay Your Workers-Respect Labour Rights campaign: https://cleanclothes.org/file-repository/agreementsummarywithannex.pdf/view

Information on the Cornell research paper can be found here: https://www.ilr.cornell.edu/news/research/global-severance-pay-program-outlined

The Cornell research proposes a solution to the pattern of the problems exposed in research conducted by labour rights NGOs during the Covid-19 pandemic: