Clean Clothes Campaign cautiously welcomes the long awaited rules on corporate sustainable due diligence proposed by the European Commission. Whereas the proposal falls short of our recommendations, the introduction of a binding obligation on companies to carry out human rights and environmental due diligence is a major step toward corporate accountability. We call upon the European Parliament and the Council of the European Union as co-legislators to ensure that the legislation ultimately brings yet stronger protections for the workers and other rights holders. 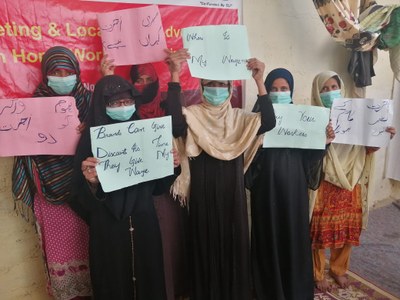 Home-based workers in Pakistan protesting for their wages to be paid during the pandemic. HomeNet Pakistan

We especially welcome the explicit inclusion of freedom of association and collective bargaining, living wage as well as health and safety among human rights impacts that companies will have to address.

Also on the positive side, albeit with serious caveats, is the possibility to hold companies liable for human rights harms in their value chains. We urge the European Parliament and the Council to build upon this foundation and further strengthen corporate accountability and victim’s access to justice. Companies must not be allowed to pass their responsibility down the value chain through contracts, or to escape full accountability in any other way. The co-legislators must also dismantle the barriers victims face in transnational litigation that are not tackled in the proposal.

“The deadly Ali Enterprises fire in Pakistan is one tragic example of what is at stake: an auditing company had certified a manifestly unsafe garment factory mere weeks before the fire in which over 250 people died, and victim’s families are still having to fight for justice nearly a decade later,” said Neva Nahtigal of Clean Clothes Campaign.

Among the most negative aspects of the proposal is the high company size threshold that is not in line with international standards such as the UN Guiding Principles on Business and Human Rights. The EC proposal limits the scope of application to companies with more than 500 employees / 150 million Euro turnover. This is lowered to 250 employees / 40 million Euro turnover for companies active in high-impact sectors including textiles, clothing and footwear, but with a further limitation to only “severe adverse impact”. Clean Clothes Campaign continues to call for all business enterprises, no matter their size or corporate structure, to be covered by the legislation.

“Such thresholds would create a huge black hole where companies can continue operating without real accountability for rights violations in their value chains. They are therefore great news for thousands of small and medium size fashion companies but terrible news for many millions of workers who make the clothes sold in European stores,” said Neva Nahtigal.

Another key area where the EU co-legislators need to firmly place rights holders at the centre is in the application of the proposed rules beyond direct suppliers. Clean Clothes Campaign has consistently emphasized that semi-formal and informal working schemes as well as unofficial subcontracting and home-based work must be accounted for in all regulatory measures.

“The proposal opened a good pathway that will need to be reinforced to ensure that all workers are protected. Many of the most egregious human rights abuses, including forced labour and wage theft, occur further down the value chain” said Muriel Treibich of Clean Clothes Campaign, also noting the commitment to a new legislative initiative prohibiting the placing on the EU market of products made by forced labour that was announced on the same day in the ‘Communication on decent work worldwide for a global just transition and a sustainable recovery’.

“The European Union has a unique chance to protect the many millions of people whose labour goes into the products that Europeans use on a daily basis. Among other things, legislators must ensure that companies adapt their own purchasing practices. This is not possible without value chain mapping and traceability which, along with transparency, must be one of the mandatory foundations for due diligence overall,” said Muriel Treibich.

Clean Clothes Campaign calls on the European Parliament and the Council of the European Union to seize this opportunity and adopt legislation that will adequately respond to the fundamental challenges and structural inequalities of today’s value chains.