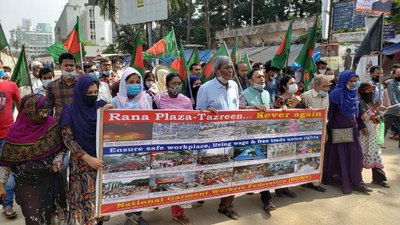 An NGWF memorial of the Tazreen fires in earlier years.

Ten years since the fateful day of 24 November, we remember those who died and our thoughts are with those who still live with the consequences of the fire. At least 112 garment workers were killed, many of them because they were unable to escape – trapped between locked exits and barred windows. This was not the first major garment factory incident in Bangladesh: for years brands and factory owners had been aware of the hazards for garment workers in the industry, but failed to act. Only after the Rana Plaza building came crashing down exactly six months later did brands rush to action and sign the legally binding Accord on Fire and Building Safety in Bangladesh.

A decade later, there are however still brands which have failed draw the lessons from the preventable deaths at Tazreen and Rana Plaza. Major brands connected to the Tazreen fire, like Walmart, Sears, and Disney, as well as brands implicated in the Rana Plaza collapse, like French supermarket chain Auchan, JC Penney, The Children’s Place and, again, Walmart, have as yet failed to sign the International Accord for Safety and Health in the Textile and Garment Industry. This binding agreement between unions and brands has replaced the initial Bangladesh Accord and will expand its life-saving programme beyond Bangladesh. “It is a disgrace that while 186 brands have signed this agreement, some laggards, most notably several brands which have first hand experience with workers dying in their death trap factories, have failed to commit to protecting the safety of the workers in their supply chain,” said Kamrul Hasan from Akota Garment Workers Federation.

On this day, the European Center for Constitutional and Human Rights and Femnet, supported by a range of Bangladeshi unions, have sent a notice letter to brands that fall under the German supply chain law, which will take effect as of 1 January next year, and have not yet signed the Accord: German brands Tom Tailor, Deichmann, Swedish furniture and home textile giant IKEA, and US online retailer Amazon. This letter warns that if the companies fail to join the initiative that is the industry’s best protective mechanism for workers that they could face legal action under the law. While legal action should not be necessary for brands to take their workers’ safety to heart, we hope that this will be the final push for major brands like Amazon and IKEA to sign the Accord, and make other laggards follow.

Ten years since the Tazreen fire, and more than nine years since the start of the Accord programme, the legally binding and enforceable system that holds brands to account for its suppliers and gives workers avenues to raise their safety issues effectively, has proven its worth. It has prevented mass casualties in the industry and made factories noticeably safer. Clean Clothes Campaign, including its Bangladeshi partners and global allies, will continue to monitor if the Accord’s Bangladesh operations keep these records up, by taking real action against non-compliant factories, being transparent about its operations, and continuing to ensure workers can speak out without fear of retaliation by management.

For workers who did get injured or even died in factory incidents in the past decade since the Tazreen fire, it is important to ensure that financial compensation is accessible. This year, finally, the Bangladeshi government, in association with employers, trade unions, the International Labour Organisation (ILO), Germany, and the Netherlands, started pilot project of an Employment Injury Insurance (EII) scheme for garment workers which will provide injured workers and family members compensation for loss of income and medical costs. For this pilot to be successful it is paramount that international brands and retailers factor in the costs related to the injury insurance scheme in their contracts with suppliers, and that the employers have registered all their workers. Furthermore, while we hope that this pilot will lead to a fully fledged insurance scheme for garment workers in Bangladesh, it is also vital not to forget workers who remain uncompensated in the past decade and to provide justice for them.

Looking back at the ten years since Tazreen, Amin Amirul Haque, President of the National Garment Workers Federation, said: "After the tragic incidents of Rana Plaza and Tazreen Fashion a lot has changed but unfortunately the state of the right to organise and collective bargaining has remained unchanged. Bangladesh is also still far away from achieving living wages and gender equality.” Commenting on ongoing efforts to improve working conditions in the garment industry, he stated: “Different initiatives are being worked on, including the upcoming EU due diligence law. To enforce labour laws in the apparel sector, workers and workers’ organisations must be part of the inception, implementation process, and complaint and compliance mechanism. The law will not be effective if it is only developed by EU-bodies without involvement from civil society."