Working conditions for Turkey's textile workers worsen under the pandemic

From the start of the COVID-19 pandemic, Clean Clothes Campaign Turkey conducted research to identify conditions workers are facing in the textile industry. The study found workers experienced several risk and violations that emerged with COVID-19, such as: unpaid leave, short-time working allowance, and compulsory use of annual leaves. There were also issues regarding health and safety measures, and whether distancing, the use of masks, and hygiene rules were followed. 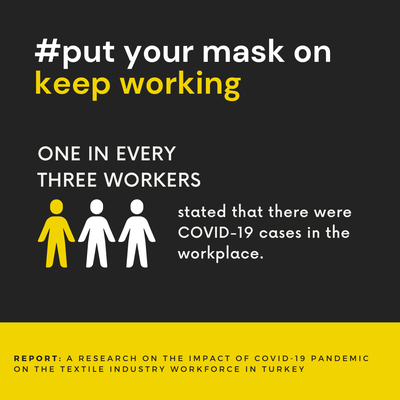 After interviews with 60 textile workers, the study found:

One of the most striking findings of the report is that informal workers have no rights and do not claim any rights. This situation becomes more apparent when unregistered workers prefer workplaces in close proximity, where they can walk to and from work during the curfew.

Another finding of the report addresses that the measures taken to support the labour market do not cover the high unregistered employment in the sector, and that they are also insufficient for the insured workers. For example, while there was the prohibition of dismissals, the employers were allowed to put workers on unpaid leave which deepened their financial difficulties.

Tarık, a young worker living with his family of seven, has continued to work during the pandemic.
In the first days of the pandemic, the workplace was closed for two weeks. The registered
workers were given a week of compulsory paid annual leave, and a week of leave without pay. Tarık could not get any payments from the state because he works without insurance.

In the first days of the pandemic, it was not mandatory to wear a mask in the workplace, however when workers started to get sick the workplace closed for a week (Tarik received weekly paid leave), and on return, workers were instructed to wear their masks.

Despite more cases of COVID-19 at the workplace, production continued, and at one point the employer declared the workshop closed, receiving state money, but continued production of PPE.

With textile workers, the majority informal workers, having to survive on wages below the minimum wage, receiving little to no social support, and in some cases put on unpaid leave, these findings make it clear that it has never been more paramount for brands to sign the wage assurance and severance guarantee fund, and ensure their workers are paid during the pandemic.

You can find the report here.

You can find out more about the #PayYourWorkers campaign here.