The crisis is far from over for garment workers who are owed 11.85 billion USD in unpaid income and severance, whilst labour rights violations flourish, according to new research by Clean Clothes Campaign. 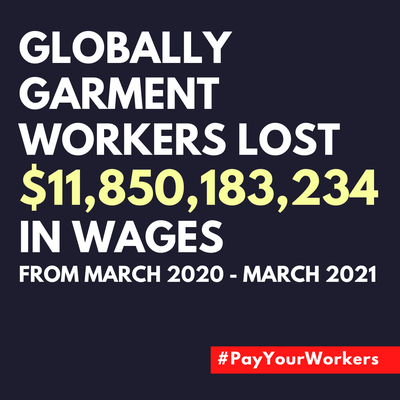 “Still Un(der)paid”, published today by CCC, presents an updated estimate for the period from March 2020 through March 2021. The report builds on CCC’s August 2020 “Un(der)paid in the Pandemic” report, which estimated that the income and severance loss for the first three months of the pandemic was in the range of 3.2 to 5.8 billion USD. Although apparel brands and retailers have returned to profitability, many workers are facing severe hardship following a year in which employers have withheld or reduced wages as they faced sudden lockdowns and unethical purchasing practices such as non-payment of goods, sudden order cancellations, and unilateral price reductions. With alarming new peaks in COVID infection rates across different regions in the world, there is no indication that this is the final bill.

Clean Clothes Campaign conducted desk research in seven major Asian production countries: Bangladesh, Cambodia, India, Indonesia, Sri Lanka, Myanmar, and Pakistan. The estimated wage gap is based on an assessment of the likely extent of underpayment of wages based on all available information. From evaluating statements from employers, industry and worker surveys, media reports on the impact of the pandemic on the garment industry, and reports of worker protests to demand unpaid wages, CCC made a series of assumptions in each country about garment workers’ income lost due to furlough, severance, and other instances of underpayment or nonpayment of wages during the pandemic.

“This figure represents an unimaginable and often irreparable human sorrow. The report aims to put specific cases that we hear and read about in perspective: this is not happening in just that one factory in Bangladesh or Pakistan, it’s happening throughout the garment industry and this is the potential financial impact: garment workers globally being owed 11.85 billion USD while brands like Nike, H&M, Inditex, and Uniqlo have long returned to profitability,” said Khalid Mahmood from Labour Education Foundation in Pakistan.

The report sums up a variety of very disturbing figures: workers in all researched countries, except for Indonesia, are dealing with a wage gap that is at least two times bigger than their average monthly wage. An estimated 1.6 million garment workers were dismissed in the seven countries during the pandemic and lockdown periods and CCC’s research indicates that many dismissed workers were not paid their full legal entitlements to severance pay. During furlough periods, due to lockdowns or order cancellations, workers were often only paid a small percentage of their usual wages, which are in any case significantly below a living wage level. As a consequence, many garment workers are facing high debts and they and their families have faced hunger during the pandemic.

"Despite trade unions' engagement to mitigate the impact of COVID-19 on workers through social dialogue, suppliers in the apparel sector violate local agreements on wages. As a result, the vast majority of garment workers are being penalized by cuts in their wages or by losing their jobs", said Anton Marcus from Free Trade Zones & General Service Employees Union in Sri Lanka.

Two groups of workers in particular seem to be at especially high risk of losing their job and income: union members and informally or temporarily employed workers, who often don’t have access to social protection regulations. Union representatives and local NGO staff who contributed to the writing of this report all voiced great concern on how the pandemic has aggravated the repression of workers’ rights to freedom of association and collective bargaining. In at least three countries, violence was used against union members who protested over unpaid wages and union activities are being blocked or hampered by lockdown restrictions. Instead of protecting workers from the pandemic and its immediate side effects, the industry is collectively failing workers. The pandemic has exacerbated several factors that were already of concern before the pandemic: low wages, non-payment of severance, union repression, and the increasing numbers of workers (often migrants and women) engaged in informal employment.

Clean Clothes Campaign is certain that, in the past three months, the global amount owed to workers has grown beyond 11.85 billion USD, as many countries are entering new lockdowns. The amount will continue to grow if brands, employers, and governments do not immediately take action. With a coalition of over 230 organisations, including 70 unions, Clean Clothes Campaign is calling on apparel brands to negotiate an enforceable agreement to assure wages, establish a severance guarantee fund and ensure respect for basic labour rights. Such a binding agreement, to be negotiated and signed by trade unions with brands, individual employers, or employer associations, will require signatory brands to ensure workers in their supply chains receive their regular wages during the period of the Covid-19 pandemic, in addition to ensuring payment of severance compensation for workers at factories that close or undertake a mass dismissal, and respect basic labour rights.

“It’s been well over a year since over 100 fashion brands and other organisations responded to the pandemic by joining together in a ‘Call to Action’ for the garment industry, and yet only a small number of workers have received any funds. In most of the ‘priority countries’ workers have received nothing and it is not evident that brands themselves have contributed anything,” said Ineke Zeldenrust from the Clean Clothes Campaign International Office. “We cannot count on brands’ own initiatives or the voluntary programmes they hide behind to deliver for workers. It is urgent that companies negotiate and sign a binding and enforceable agreement with unions to prevent millions of garment workers and their families from being driven even deeper into destitution.”