Webinar: Labour rights abuses in Myanmar since the military coup - a focus on the garment sector

Join our webinar on 13th October as we bring together experts on Myanmar, labour rights and the garment industry to reflect on ways brands and the international community can support labour and human rights. 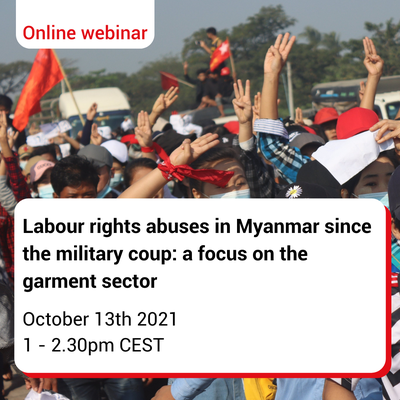 Clean Clothes Campaign (CCC) invites you to an online public event, bringing together experts on Myanmar, labour rights and the garment industry to provide a state of play on human and labour rights violations and reflect on how brands and the international community can have an impact in combating military repression and supporting human rights in Myanmar.

The situation regarding human and labour rights in Myanmar has continued to deteriorate since the military junta coup in February. The military has brutally violated human rights and, in their attempt to wipe out opposition, targeted workers, activists, labour rights organisations and trade unionists. As of September 23rd, 1121 people have been killed by the military since the coup and 6718 are detained in custody. Among them is Daw Myo Aye, leader of Solidarity Trade Union of Myanmar. Her health is believed to be in a critical condition and she is being held in solitary confinement with no visitors allowed, not even her lawyer.

This event will explore how, within this high-risk context, garment brands can prioritise workers’ rights, exert their power for good and ensure that they do not contribute to abuses against workers’ rights. It will also examine CCC’s call for the suspension of the EU’s preferential trading system ‘Everything But Arms’ (EBA).

The event will be moderated by Manny Maung, Myanmar researcher at Human Rights Watch.

Burmese/English translation will be provided.