The current wave of Covid-19 infections in South Asia has devastating consequences for workers in Sri Lanka, negatively affecting their health, livelihood, and right to unionise. Unions and labour rights organisations call upon major brands sourcing from Sri Lanka to take responsibility for the workers in the supply chain. 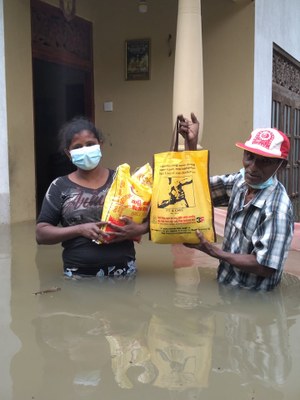 Garment workers are particularly affected by the pandemic. Many factories remain open and often workers have to work in crowded circumstances without the needed health and safety measures. Workers generally also cannot keep their distance in the boarding houses where many of them live. Consequently, Sri Lanka has seen a range of mass outbreaks in garment factories since late 2020. During the current wave, this has led to the death of at least six workers and many other workers falling ill. Even though garment factories have functioned as infection hubs, workers are not given access to affordable testing and health care. Repeated calls by Sri Lankan unions for the establishment of bipartite health committees in factories through which workers can contribute to their own workplace safety have gone unheeded by many factories.

Chamila Tishari of Dabindu Collective said: “Factories are forcing workers to come to work during this wave of the pandemic. If workers are infected, they have to wait many days before being quarantined or hospitalised. Even though garment producing zones are playing a major role in the Covid-19 outbreaks, the vaccine strategy of Sri Lanka is not prioritizing garment workers.”

In the past months, since our March briefing on the situation of workers in Sri Lanka, Clean Clothes Campaign members and partners have, together with allies, continued to contact brands, embassies of countries where major brands are headquartered, factory owners and the Sri Lankan government. The situation of garment workers in Sri Lanka however remains insufficiently addressed by all of these parties and continues to be extremely dire.

Anton Marcus, of trade union Free Trade Zones & General Services Employees Union, who has been actively reaching out to the government and factory owners, gives an example of how workers’ plights continues to be disregarded: “Workers are infected en masse at their workplace during this wave, because factories’ measures continue to be insufficient. In the Unichela and Thulhiriya factory locations, both owned by MAS group and with a shared workforce of almost 10,000 workers, large numbers of workers were infected. The Labour Minister has ordered an investigation, but a similar investigation ordered in October 2020 after mass outbreaks in a factory of the Brandix group failed to lead to any outcomes or provide any protection to workers in this next wave, nor have any of the families of the deceased workers been compensated.”

The situation for workers is further aggravated by several factors, including the failure of brands and factory owners to pay them their full wages and bonuses, union busting practices, and climate change related extreme weather causing flooding.

Many workers who were sent home during any of the waves of the pandemic – to ensure space for social distancing in the factory, because of lack of orders, or because they need to self-isolate – are often paid only half of their already extremely low wages or even nothing at all. Workers thus were forced to choose between hunger and their health or even the risk of infecting coworkers. Workers have often had to fight during the past year to receive the annual bonuses to which they are entitled, and which are even more crucial in meeting their daily needs in a year in which they did not receive their full wages. In this process, many organising workers were additionally confronted with union busting measures by factory management.

Palitha Atukorale of Progress Union said: “Brands and retailers have made large profits on the basis of the low wages of workers in the Sri Lankan garment industry. The least they can do is to ensure during the pandemic that workers receive their full wages, get severance if they lose their job and can stand up for themselves. These major profitable brands and retailers have a moral obligation to sign a binding agreement that can ensure workers are paid what they are owed.”

Extreme weather has furthermore exacerbated the situation of workers who, due to travel restrictions and lockdowns, were already confined to crowded boarding houses. Flooding has now made their housing uninhabitable. Members and partners in the CCC network on the ground are providing much needed emergency relief, but brands, retailers, factory owners, and the government should feel called upon to take responsibility for the workers in their supply chains.

Gayani Gomes of Women’s Centre says: “In the past year, many civil society groups and unions have recognised the dire situation of garment workers during the pandemic and even more so during the flooding, and responded with direct relief. It however should have been the responsibility of the government and the direct and indirect employers of these workers to ensure that they are protected from health risks and hunger while enabling profits for the garment industry.”

Factory owners, especially the rich factory groups that dominate the employers’ association JAAF that represents a large part of the industry, and major brands sourcing from Sri Lanka, such as PVH (Calvin Klein), VF Corporation, Marks & Spencer, Victoria’s Secret and Next, need to take responsibility to ensure that workers are paid their full wages and bonuses during the pandemic.

We ask that these brands