Open letter to European Commissioners: Kalpona Akter calls for strong protections against violations and access to justice for victims 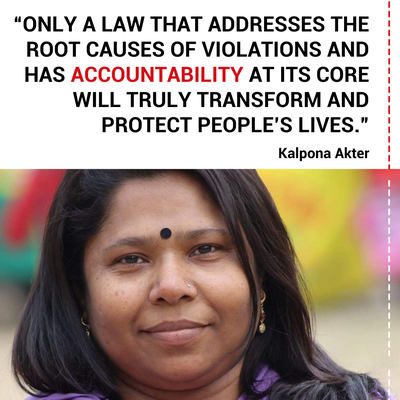 As a former child worker and a blacklisted union organizer who now leads the Bangladesh Center for Worker Solidarity, Kalpona Akter is certain: “Only a law that addresses the root causes of violations and has accountability at its core will truly transform and protect people’s lives.” She therefore calls on the Commissioners to introduce strong rules that also give victims of corporate abuses access to justice in European courts.

Kalpona Akter vividly remembers the deadliest disaster in the history of the garment industry. When the Rana Plaza building in Bangladesh came crushing down in 2013, over 1,100 garment workers lost their lives, and many others were injured for life.

“A few days later I was picking through what was left of that deathtrap building, hoping to find labels from big brands. Risking our lives like that was the only way to find out which companies sourced from the Rana Plaza factories, and those labels were the only hope to at least get some compensation. It took us weeks, but we identified about 30 brands. Many of them had nice sounding codes of conduct that had made no difference,” writes Kalpona Akter.

She calls for the new rules to include mandatory value chain transparency so that everyone can easily trace a company’s production sites, or a T-shirt’s origin.

Every year in April, when the survivors of the Rana Plaza collapse get together in memory of those who had died in the rubble, Kalpona Akter is reminded what happens if workers’ rights are left to voluntary commitments, and what it takes for the victims to access remedy.

“After that traumatic digging through the rubble it took two years of global campaigning before brands paid into the compensation fund. Some never did. And to this day not a single legal case in Bangladesh against the owners and others implicated has delivered justice.”

As the European Commission is getting closer to proposing legislation that will include mandatory human rights due diligence, Kalpona Akter points out: “New rules will not make a difference for those who died in unsafe factories. But if you make sure that every company has to identify, prevent and mitigate human right risks in its whole value chain, including the company’s own purchasing practices, you can help save and improve many millions of lives in the future.”

The letter was sent to the commissioners earlier this month and is made public today.