Commemorating the Rana Plaza anniversary by preventing the next disaster

24 April marks eight years since the Rana Plaza building collapsed with thousands of people inside, killing at least 1,134 people. In the face of a new lockdown in Bangladesh we are offering an online commemoration platform, to safely mark this anniversary. Additionally the website enables visitors to urge garment brands to continue preventing future disasters. This is vital as the Bangladesh Accord, the programme that has successfully made factories safer since Rana Plaza, is at risk of being rendered meaningless within the next five weeks. 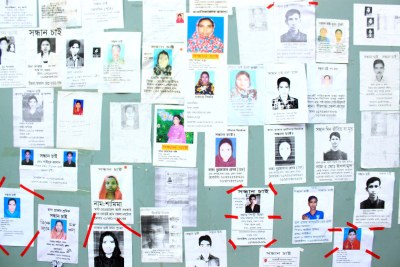 The Rana Plaza collapse is the worst industrial disaster the garment industry has ever seen and it was entirely preventable. Workers were forced to enter a building they knew was unsafe under threat of losing their wages. Even though a range of fires and building collapses had shown the risks present in the Bangladeshi garment industry, brands’ own voluntary programmes had failed to detect or remedy the many safety risks in the Rana Plaza factories. This week, our thoughts are with everyone who had to live through or died in this tragedy. To allow all those in Bangladesh and internationally to meaningfully commemorate this day and the people who were affected by it, even during a lockdown, Clean Clothes Campaign and unions in Bangladesh launched the website RanaPlazaNeverAgain.org in Bangla and English, where people can leave a message of commemoration.

The commemorative website also has a direct messaging opportunity to brands which produce their clothes in Bangladesh and are on the verge of turning their backs on the programme that has successfully made factories safer for two million workers in the past eight years. The Accord on Fire and Building Safety in Bangladesh was created weeks after the collapse as a binding safety programme, out of the realisation that the voluntary programmes of the past had failed to prevent this tragedy. The Bangladesh Accord was signed by over 200 brands and covers over 1600 factories. The binding contract that has been crucial to the programme’s success and brands’ compliance however runs out on 31 May. No brands or retailer that is currently a member of the Accord has yet signed a new agreement that would be legally enforceable upon member brands with Global Labour Union Federations UNI and IndustriALL. While there are first signs that some brands start to realise the need to commit to the unions’ agreement proposal, most brands are still countering with watered down versions of the programme that carry a very real risk that workplace safety in Bangladesh would backslide to pre-Rana Plaza levels.

Kalpona Akter, president of the Bangladesh Garment and Industrial Workers Federation said: "Rana Plaza was a homicide rather than an accident. This preventable disaster would not have happened with adequate safety measures and a strong monitoring system with inclusion of workers' voices. The Bangladesh Accord has introduced and implemented these in the past eight years. If we want to prevent another Rana Plaza and sustain the positive changes, then we need a new Accord agreement to be signed by all brands sourcing from Bangladesh."

Unions and labour rights organisations in and outside Bangladesh are calling for such an international binding safety agreement. This would ensure that the brands’ commitments to factory safety across their garment supply chains are legally binding and can be upheld in court, which is not possible under the national level initiative set up last year to implement the Accord operations.

Such an agreement is needed because, even though in Bangladesh the safety progress achieved since 2013 under the Accord agreement has been considerable, the work is not finished. For example, in over 1,200 factories supplying Accord brands, verification of a properly installed fire alarm is still pending and in over 900 factories there are no guaranteed safe exit routes in case of an incident. These figures show that in order to continue safe lives, the work of the the Accord can not be allowed to stall or slow down.

An international binding safety agreement is furthermore needed to allow for the expansion of this successful model to other countries with notoriously unsafe garment factories, such as Pakistan. Recent incidents in Morocco and Egypt furthermore show that unsafe workplaces are still rife in the industry and that brands’ own voluntary programmes fail to keep workers safe.

Khalid Mahmood, director of the Labour Education Foundation (LEF) in Pakistan, said: “Every day, we hear news of small-scale incidents in South Asian countries where workers are injured or lose their lives. It is just matter of time that we hear news of a new big incident. Workers should be given more freedom to organise their unions and bargain collectively so that they are able to participate in safety policies. Brands, governments and employers have to make sure that workers feel confident, free, safe and health while working in the factory.”

Taqbir Huda of the Bangladesh Legal Aid and Services Trust furthermore stresses that eight years since Rana Plaza collapse there is still no insurance system to compensate workers who are injured in the workplace, meaning that workers are at the mercy of the factory owners: “Most victims of occupational injuries and deaths remain uncompensated as negligent employers refuse to pay even the paltry amounts prescribed by our labour law. Today is as good a day as any to recognise that liability for occupational injuries should be spread fairly across the global supply chain, and not just limited to contractual employers within the confines of national territories, especially considering that the economic benefits the workers’ hazardous labour accrue transcend national boundaries.”

“Worker’s lives overall have changed little since Rana Plaza”, said Ineke Zeldenrust of Clean Clothes Campaign: “they still earn too little to live a decent live on, the freedom to organise is still under pressure, there still is no insurance for those who get injured or ill in the workplace, including from Covid. Eight years since this disaster it is concerning to see brands advocating for the same voluntary self-monitoring model that failed the Rana Plaza workers in the first place. It is vital that brands and retailers sourcing from Bangladesh ensure that the one major achievement that came out of this disaster is not lost. There are five weeks to go until the Accord agreement runs out, but the first Accord came about in only three. Brands can make it happen if they want to."