An analysis of existing and upcoming human rights due diligence legislation in relation to the Accord on Fire and Building Safety in Bangladesh, published today, shows that apparel brands will expose themselves to considerable liability risks if they fail to negotiate and sign a follow up agreement to this ground-breaking safety programme, which will expire in two weeks’ time. 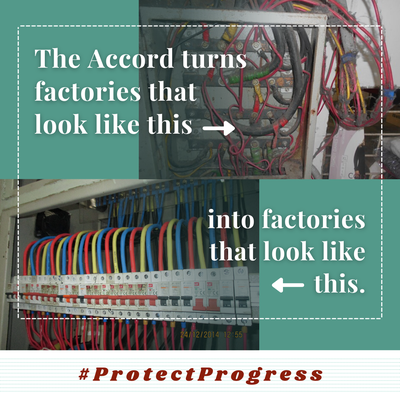 Without a new agreement signed by apparel brands and retailers, the Bangladesh Accord will cease to exist. This game-changing agreement, originally signed in 2013 after the Rana Plaza building collapse which killed more than 1,100 workers and injured many more, revolutionized factory safety inspections in Bangladesh. Thanks to its binding nature, transparent reporting, and robust grievance mechanism, the Accord now has a well established track-record of saving workers’ lives by dramatically reducing fatal building collapses and factory fires.

Already in January 2020, the brands and unions that govern the Accord agreed to negotiate a binding follow-up agreement with the option to expand the programme to other countries, to ensure the important safety work would remain binding after the expiry of the current contract. Due to the COVID-19 pandemic, negotiations started late and have dragged on beyond the initial deadline of 31 May 2021. Despite their claims to care about worker safety, brands like H&M, Aldi Nord, Otto, Auchan, and Carrefour have failed to sign an agreement. Their failure to do so is in contravention to their human rights due diligence obligations, both under the French Corporate Duty of Vigilance Law or Loi de Vigilance as well as the upcoming German Act on Corporate Due Diligence Obligations in Supply Chains or Lieferkettengesetz.

This explains why KiK, a German brand that faced a civil compensation lawsuit for the factory fire at Ali Enterprises in 2012 in Pakistan is one of the most vocal proponents for the continuation of the Accord in Bangladesh as well as its expansion to other countries. While the case was eventually dismissed, Miriam Saage-Maaß of the European Center for Constitutional and Human Rights has no doubts: “Companies leaving the Accord risk legal proceedings under the French as well as the German law. Under these new laws, a company will be liable if workers in their supply chain are harmed in a factory fire or building collapse and the brand has not fulfilled its due diligence obligations.”

According to the Accord data, notwithstanding the remediation of tens of thousands of identified safety hazards, hundreds of factories in Bangladesh still lack such basics as verified fire alarms and sprinklers. “Checking, for example, the progress in implementing the Corrective Action Plans for the 63 Bangladeshi factories that produce for the French brand Carrefour, reveals that 42 of these factories still do not have a fully installed and verified fire alarm system and 43 lack a completed sprinkler system. If the Accord expires, these factories pose a major risk to worker safety and a liability risk to Carrefour,” said Carolijn Terwindt of the Clean Clothes Campaign.

On its own, the mechanism of the Ready-made-garment Sustainability Council (RSC) in Bangladesh is not adequate to fulfill company human rights due diligence obligations. The RSC was established to take over the Accord’s inspection operations on the ground in Bangladesh, but cannot hold brands accountable. “Unless there is a legally binding commitment by brands to continue to support the Accord’s work -- including both the requirement on factories to operate safely and making it financially feasible for them to do so -- garment workers’ lives in Bangladesh will be at risk. Under human rights due diligence laws, this is a risk that, if brands refuse to renew the Accord, they would ignore at their own peril as well”, said Ben Hensler of Worker Rights Consortium.