Uniqlo and the women owed $5.5 million

In the fashion game, brands always win and garment workers always lose. It’s a stacked deck, the winning hands held by those with the money. In the quest for ever-greater profits, garment workers are often treated as yet another commodity, to be swapped at will, as brands act with impunity and watch their profits rise. 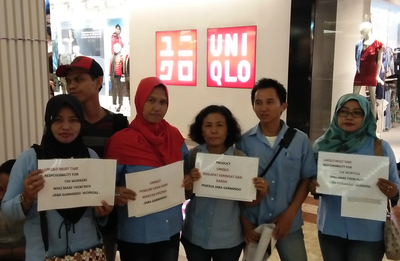 Uniqlo, a brand worth $8.6 billion, has been embroiled in an ongoing workers rights case for nearly five years, yet this has done nothing to dent their rising profits and rapid expansion. Owned by parent company Fast Retailing, Uniqlo has ambitions to become one of the world’s biggest clothing retailers. Tadashi Yanai, CEO of Fast Retailing, is the richest man in Japan. He is worth $31.6 billion, and yet 2,000 of the Indonesian garment workers who helped to make him so rich now live in abject poverty. They worked in two Jaba Garmindo factories, making clothes for Uniqlo and, in the largest unresolved wage theft case in the garment industry, they are legally-owed $5.5 million in severance pay, yet Uniqlo continues to deny responsibility towards these workers. The case has had no negative impact on their profits, and Fast Retailing increased their operating profit by 9% in 2019 alone.

Jaba Garmindo was under investigation for labour rights abuses, including the firing of pregnant workers and the harassment of trade union members. Uniqlo was a major buyer and stopped placing orders while the investigation was ongoing. This is not the action of a brand invested in workers rights, it is a self-serving move designed to distance them from an investigation into rights violations. A responsible step would have been to commit to staying in the factories, to finding out the results of the investigation and to working with management, workers and trade unions to put measures in place that ensure the protection of workers rights. Instead, Uniqlo’s exit led to Jaba Garmindo’s collapse into bankruptcy. In April 2015, 4,000 garment workers arrived at work to find the factories shuttered and their wages unpaid, including vital benefits such as severance pay. Of those workers, now, nearly five years later, 2,000 of them remain fighting for what they are still owed: $5.5 million in severance pay.

Indonesia offers no state benefits, there is no monetary security blanket for times without work, which is where legally-mandated severance pay comes in. It provides a buffer for periods between jobs, and workers rely on it to ensure that they will still be able to pay rent should their factory suddenly close or go bankrupt. The issues of wage theft and severance pay violations are of growing concern in the global garment industry. The business model for international fashion brands is based on mobility. Brands are free to move orders at any time from factory to factory, country to country, looking for the highest productivity at the lowest rates, which usually means those operating under the laxest labour laws. The risk inherent in this mobility rests on garment workers. The majority of the Jaba Garmindo workers are women, mirroring the gender breakdown of garment workers worldwide. The global fashion industry, estimated to be worth $3 trillion, is built on the sweat of these women and others like them. It is those earning poverty pay, working six or seven days per week, 14 or more hours per day, who suffer when a brand, profiting in the billions, pulls out of a factory often with little or no notice, having found a cheaper, faster labour alternative elsewhere. This is injustice, pure and simple.

These women are often forgotten, or reduced to empty promises tagged onto ‘conscious’ ranges that do little to actually change the lives of women on the factory floor. Many of the former Jaba Garmindo workers have been unable to find new jobs, either considered too old, having worked at Jaba Garmindo for years, or blacklisted for their continued campaigning efforts. Some are now homeless, unable to afford rent or nutritious food. The negative effects continue to spill onto the next generation as workers have had to pull their children from school, unable to afford the fees, and others are relying on loan sharks in order to buy essential medicines. Despite this, Yanai and the Uniqlo brand purport to support female empowerment. In June 2019, Uniqlo signed a partnership with UN Women, the first formal alliance between a clothing company based in Asia and UN Women. Of the deal Yanai stated: “We aim to create an enabling environment for all women in our business,” and yet he has done nothing to enable the women of Jaba Garmindo. With them in mind, can Uniqlo’s partnership with UN Women be seen as anything other than a cynical attempt to buy credibility in the sphere of women’s empowerment? Because, quite simply, there can be no true empowerment without economic empowerment.

There is a gap in legislation that allows brands to distance themselves from the workers who make their clothes. Instead of mandatory regulations, brands operate under the ethical codes of voluntary initiatives, which are evidently not fit for purpose when it comes to protecting garment workers human rights, and workers are forced to rely on voluntary brand donations when things go wrong. This case is currently under investigation with the Fair Labor Association, a social compliance initiative of which Fast Retailing is a member. Brand membership includes a commitment to uphold a code of conduct that protects workers human rights, and this is a key opportunity to test how effective such voluntary initiatives can be in actually protecting workers rights.

Jaba Garmindo is sadly not an isolated case, and there is an emerging industry standard for brands stepping up in wage theft cases. Nike, Adidas and Fruit of the Loom, among other brands, have all helped to resolve wage violation cases and Uniqlo are being asked to follow this standard. The women of Jaba Garmindo are not looking for charity. They aren’t asking for a kind philanthropic donation, they only want what they are entitled to under law: the money they have earned through hard work and long hours while making clothes for Uniqlo. They have tried everything in their power to retrieve the $5.5 million they are owed, including going to court in Indonesia. Their claim was upheld but the court has no powers over international brands such as Uniqlo, and no ability to make them pay. However, even with the black hole of legislation, there is a clear moral imperative for Uniqlo to act and to give these women, and their children, back their future.

This International Women’s Day, join us in demanding that Uniqlo and Yanai put action behind their claims of enabling women workers. If they truly support female empowerment then they must address the violations within their own supply chain. Join us in calling for @UNIQLO_JAPAN to put people over profit: #PayUpUniqlo #JusticeforJabaGarmindoWorkers