Union victory at the Huabo Times factory in Myanmar

We congratulate the union at the Huabo Times factory in Myanmar for signing an agreement with the factory management after more than two months of fighting against union discrimination. 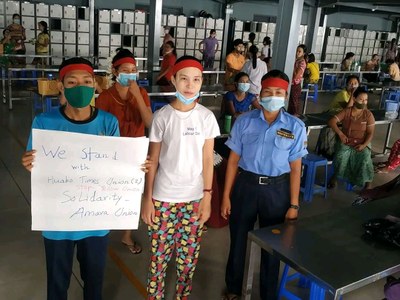 In a clear case of union busting, 26 union members, including four union leaders, and 81 co-workers sympathetic to the union, were dismissed within days of the union officially registering in early May. Factory management justified the dismissals as a move to downsize in response to Covid-19, however prior to the union registration workers had been assured the factory would not need to retrench workers, and a few weeks after the dismissals, management transferred workers from another factory to fulfil orders in Huabo Times.

The union members, supported by the CCC and CCC member organisations Let’s Help Each Other and Solidarity Center, reached out to the main buyers: Inditex (Zara), Bestseller and Primark. Their case featured in international media and, together with the Rui-Ning union (who reached victory in their case two weeks prior), they wrote open letters to the brands to expose the union busting taking place under the guise of Covid-19.

Inditex played a key role in the negotiations between the union, factory management and brands, and were supported by Spanish union CCOO. The signed agreement means that the 26 dismissed union members will be reinstated and union demands will be met. This sets a clear precedent for the success of worker organising.

While Inditex took a leading role in negotiations, the other brands were less forthcoming, and there was a lack of transparency concerning Bestseller’s involvement in resolving the case. Bestseller has stated that it has ‘zero tolerance’ towards violations of Freedom of Association yet, given that this is a reoccurring issue in its supply chain, the brand needs to take a more proactive approach towards tackling union busting should future cases arise. Bestseller has said it will be ‘closely monitoring the implementation’ of this agreement, as will the CCC. We urge all brands to adopt clear policies to combat discriminatory dismissals and to ensure their suppliers commit to fair retrenchment and re-hiring.

The resolution of the Huabo Times case, with local union involvement at its centre, represents another important step towards establishing a robust labour movement in Myanmar.