A group of workers in Romania received their full back wages after an intense media campaign went viral. During the first months of the pandemic, they received 140 EUR, just over half of their regular monthly wage. The Clean Clothes Campaign (CCC) network and supporters put pressure on Inditex, Holy Fashion and a UK high street brand: three companies sourcing from the Tanex facility. International pressure led these brands to take responsibility to settle the violations between the management and the workers. 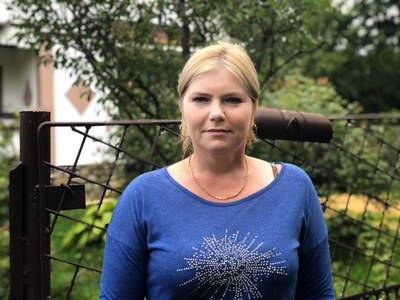 Like thousands of workers worldwide, the workers of the Tanex factory saw their wages cut without justification during the pandemic. Normally, Romanian garment workers receive the legal minimum wage of 278 EUR – this includes overtime. This legal minimum wage amounts to 24% of a base living wage for Romania and 76% of the poverty threshold for Romania (as of 2018). That means that during the COVID-19 pandemic these workers only received about 10 to 15% of a living wage.

Other labour and human rights violations that occurred at Tanex during the COVID-19 pandemic included intimidating and harassment of  workers, non payment of mandatory social insurance contributions and not paying overtime.

One worker broke the silence

One worker, Angelica Manole, made the abuses public. She published her pay-slip showing that she, and many of her co-workers, received half her regular wage. Shewas the only one who publicly dared to talk about this violation for fear of retribution.

This fear was not unjustified. After her plights went viral on social media, the factory fired her for “making public statements in the mass-media”, while denying the violations mentioned.

The labour Inspection, responsible for workers’ rights, initially chose the factory’s side by accepting the employers’ narrative that workers had not worked full weeks and taken unpaid leave. However, after public pressure on the Labour Ministry, the Minister ordered a new inspection, after which he personally apologised to Angelica Manole. The factory was fined for not paying the legal minimum wage and for failing to maintain documents concerning unpaid leave.  Only when the group of Romanian workers joined forces with the global CCC network and wrote to Tanex’s main buyers, their plight was properly picked up. Under pressure from the Clean Clothes Campaign and the workers, the brands reached out to the factory. Union access was garantueed, which had previously been denied. Finally, in September the workers who were still employed at the factory in August received their full salaries, and after further pressure, those who were fired or left the factory in the months before were also paid the money they were owed.

A call to brands worldwide to #PayYourWorkers

The situation of the Tanex workers is no exception. In garment producing countries across Asia, Europe, Africa, and the America, garment workers are left without their full wages or without severance after layoffs. The CCC network therefore calls upon brands and retailers around the world to monitor their supply chains, find out about situations such as that of the Tanex workers, and ensure that these workers receive what they are owed. Brands and retailers can make their commitment to do this public by publishing the wage assurance. As delighted as we are that the Tanex workers, whose case was featured in our #PayYourWorkers campaign launch, are made whole; hundreds of thousands of workers around the world are still waiting for their full wages. It is up to brands and retailers to take swift action.

Romania, together with Italy, is leading the list of countries with most people working in garment production in the EU. An estimated 90% of the workforce are women who work in about 9000 factories for brands such as H&M, Zara and Nike. While many assume that women’s salaries are just a small part of the family income, in reality many of these workers support entire families from their wages alone.