Campaigners from the Clean Clothes Campaign and Labour Behind the Label will be marking International Women’s Day 2020 by holding a demonstration on Saturday 7th March outside Uniqlo’s flagship London store in solidarity with 2,000 garment workers from the former Jaba Garmindo factory in Indonesia. 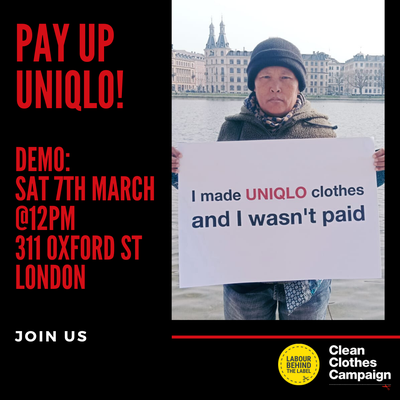 Uniqlo was a major buyer at the factory before pulling their orders at the end of 2014, leading to Jaba Garmindo’s collapse into bankruptcy by April 2015. 4,000 garment workers were left suddenly unemployed and owed wages and benefits pay, of which severance pay is a key component. Nearly five years on, 2,000 of those workers are still calling for the $5.5 million in severance pay that is owed to them under Indonesian law.

The majority of the Jaba Garmindo workers are women, and many are in desperate situations having been unable to find new work, either considered too old for new employment after working at Jaba Garmindo for years, or unofficially blacklisted for their continuing campaigning efforts. Workers are now homeless, unable to afford nutritious foods, essential medicines or to continue to send their children to school, and some of the workers are surviving by borrowing from loan sharks each month. Indonesia offers no state benefits and the severance pay requirement fills this gap, providing an income for when workers are between jobs. Wage theft and severance violations are of growing concern across the garment industry, where brand mobility leaves garment workers vulnerable and carrying the bulk of the risk.

Uniqlo, owned by parent company Fast Retailing, is estimated to have a brand worth of $8.6 billion and Tadashi Yanai, CEO of Fast Retailing, is the richest man in Japan, worth $31.6 billion. Yanai has ambitious targets for the brand, which currently has over 2000 stores across 24 countries and continues to expand. In June 2019, Uniqlo signed a partnership with UN Women, the first formal alliance between a clothing company based in Asia and UN Women. Yanai and the Uniqlo brand purport to support female empowerment, yet their lack of action to ensure remedy in this case do not support this. In response to on-going demands for Uniqlo to pay up, or at least take an active role in ensuring the workers receive the money they are owed, Uniqlo has effectively denied any responsibility towards them and refused to meaningfully engage in mediation with the workers.

“If Uniqlo cares at all about female empowerment they will take immediate steps to resolve this case and pay the workers what they are owed. These 2,000 workers are not asking for charity, they are asking for what they have earned by law, while making clothes for Uniqlo. We’re calling on CEO Tadashi Yanai to do the right thing and pay the $5.5 million and give these workers back a future,” says Ilana Winterstein, Urgent Appeals Campaigner at Clean Clothes Campaign.

“The workers of Jaba Garmindo have waited long enough for the money they are entitled to, money that they have earned while making Uniqlo clothes. You can’t empower women workers if you don’t pay them. It’s time for Uniqlo to pay up,” states Meg Lewis, Campaigns Manager at Labour Behind the Label.

The demonstration will feature a performer dressed as Tadashi Yanai, CEO of Uniqlo, presenting a short workshop on ‘How to get rich and ignore workers’ rights.’