C&A ignores union busting at its supplier factory in Myanmar

Two years ago this week, a Myanmar garment factory started a union-busting campaign against a newly formed union, leading to the dismissal and forced resignation of the union’s leadership. All that time, the factory’s major buyer – garment brand C&A – stood by and watched. Despite repeated requests, C&A has failed to address the situation and bring justice for the workers. 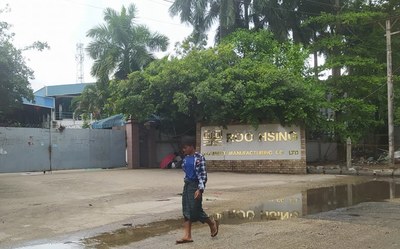 The garment factory, located in Hlaing Thayar, an industrial zone in the western part of the capital Yangon, produces clothes primarily for brand C&A. Another buyer is UK brand Next. The factory is typical of the garment industry in Myanmar, being foreign owned and producing for mostly foreign brands. The factory also perpetuates an all-too-common tradition in the garment sector of Myanmar: union busting.

In May 2018, right after the introduction of a new legal minimum wage in Myanmar, the factory management introduced a new bonus system. For the workers, who had been desperately awaiting the increase of the minimum wage, this new bonus system that was now forced on them felt like a way for management to make them work more, thereby cancelling out the effect of the wage rise (an unfortunately more common practice in the industry).

In a surge of discontent among the workforce, some 1,000 workers staged a one-day strike to protest the new bonus system. On the day after the strike, 5 June 2018, management and workers met with the Hlaing Thayar Township Conciliation Body and an agreement was reached that acknowledged the rightfulness of the workers’ complaints and ruled that the previous bonus system needed to be restored. On 12 June however, the factory forced workers to sign a revocation notice, stating that management was not required to implement the agreement reached on the bonus system.

Not intimidated by this setback, workers set up a factory-level union as a way to address other issues and grievances with management. Workers had concerns about implementation of leave policies, health and safety issues, and more.

The management, however, was less than thrilled about this development and started to harass and intimidate workers. Before long, the chair, the treasurer and several other members of the central executive committee of the union were dismissed or bullied into resigning.

For over a year and a half, from July 2018 until March 2020, Myanmar-based Action Labour Rights, Netherlands-based Schone Kleren Campagne (Clean Clothes Campaign Netherlands) and SOMO (the Centre for Research on Multinational Corporations) have tried to engage in a dialogue with the sustainability department of C&A Global to resolve the labour dispute at the factory amicably. C&A’s public emphasis on its commitment to corporate responsibility, however, has proved inadequate when tested by this actual case. Despite efforts to lay bare the problems at the factory, C&A has failed to use its influence to correct wrongful actions by the factory management. This includes the failure to prevent or remediate the unilateral introduction of a bonus system on workers that cancelled out recent wage rises, the failure to ensure that freedom of association was respected at the factory, and the failure to end the targeted harassment of workers as well as reinstate affected workers. For two years now, C&A has failed to conduct proper due diligence and neglected to ensure that workers’ grievances are properly addressed. Despite its public assurances on labour rights, the company has allowed blatant labour rights violations in its supply chain, which have been repeatedly brought to its attention, to continue.