Months into the pandemic, clothing giant C&A has agreed to pay in full for orders placed before the pandemic hit. This decision followed a public campaign by the Clean Clothes Campaign together with a broad range of other labour rights groups united behind the hashtag #PayUp. 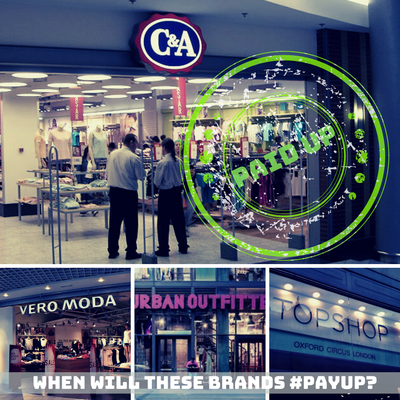 When in March the pandemic caused stores to close in Europe and North America, apparel companies at the top of supply chains responded with a familiar reflex. They outsourced the risks and the costs of this economic uncertainty by cancelling existing orders with their suppliers. This meant that factories were left with fabric already paid for or clothes that were already made, and in some instances even shipped, but without funds to pay their workers. After the exposure of this behaviour by the Worker Rights Consortium (WRC) and the Penn State Center for Global Workers' Rights, some brands immediately reinstated orders. Many others, however, refused to pay in full and on time for orders they themselves had placed.

This was the moment the #PayUp campaign swept into action. By publicly calling out brands for leaving their suppliers and the workers making their clothes out in the cold in a time of global hardship, several other brands agreed to pay for the orders placed. Some brands, such as C&A, tried to get itselves removed as a campaign target by committing to paying for a high percentage of the orders but then delaying those payments of up to one year. In a time of world-wide crisis, being paid with such a delay is not much better than not being paid at all.

This meant that C&A remained among the brands featured on the negative side of WRC’s public brand tracker. Sustained campaigning and lobbying by the #PayUp campaign eventually caused companies such as Levi’s, Gap, and Primark to finally honour all orders over the summer. C&A finally followed last week, paying up tens of millions of dollars that were not part of its earlier commitments in response to the #PayUp campaign.

C&A published this step without owning up to the fact that it initially cancelled orders; merely saying it initially put orders on hold. Its assertion that the company does “its utmost to support apparel suppliers” by taking this step is far from the truth. Paying for what a company ordered in the first place is closer to the bare decent minimum. The time C&A needed to make this decision will furthermore have done damage, maybe even irreparable, to its suppliers and will have hurt the workers making C&A’s clothes. The company, owned by the richest family of the Netherlands, could have made a different decision much earlier.

Suppliers and the workers making clothes for global garment companies will need support beyond meeting minimal contractual obligations. Research shows that garment workers around the world have not been paid billions of dollars in legally owed wages in just the first months of the pandemic and that garment factories around the world are facing a massive decline in order volume and demands for high price discounts on the orders that are placed. To ensure that workers are not footing the bill for this pandemic, apparel companies with supply chains need to take responsibility for the workers that handled their goods before the pandemic, by publicly ensuring that they will be paid what they are owed. This would be the next step for C&A to take.

Apart from that there are still many companies that have failed to even take the first, minimum step to honouring pre-pandemic contracts such as Kohl’s, Urban Outfitters, and The Children’s Place and have prioritised company and shareholder profits over the fates of their suppliers and workers. Some of these companies, such as Arcadia (Topshop), Edinburgh Woollen Mill (Peacocks), and Bestseller, are owned by billionaires and yet are refusing to compensate their suppliers in full or are imposing retroactive discounts on products they previously ordered. It is time garment companies take responsibility for their workers at a time of crisis.