Garment workers in Romanian earn a mere 14 percent of a living wage. Therefore their family members have to search for precarious jobs in Western Europe. 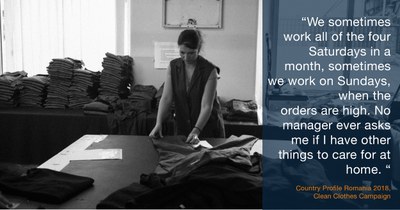 The Clean Clothes Campaign has revealed poverty wages in the heart of Europe. The organisation’s new country report for Romania analyses extensive research investigations spanning the past six years, with a special focus on 2017-2018. Almost half a million people work in Romania’s fashion industry – making this the biggest workforce in this sector in Europe. The main export destinations for clothing „Made in Romania“ are Italy, the UK, Spain, France, Germany, and Belgium. Brands found during the investigations range from discounters and fast fashion companies to high-end luxury brands, including Armani, Aldi, Asos, Benetton, C&A, Dolce Gabbana, Esprit, H&M, Hugo Boss, Louis Vuitton, Levi Strauss, Next, Marks & Spencer, Primark, and Zara (Inditex). With almost 10,000 factories and sweatshops, Romania belongs to one of the most longstanding production countries for Western European fashion brands.

For more than a decade, the country’s garment industry has been suffering from a dramatic  labour shortage , because the industry’s working conditions are infamously bad in the country. Workers regard the industry’s extremely low wages as the most serious problem. The average wage within regular working hours of interviewed workers was as low as 14 percent of a living wage. Contrary to the law, the salary within regular working hours was very often below the statutory minimum wage – which itself only constitutes a mere 17 percent of a living wage. According to workers, non-payment of the legal minimum wage for regular working hours is the norm.. Many workers report that they are forced to take out loans to deal with everyday expenses like heating costs in winter. This means that most workers are heavily in debt. “I am paying back a loan while earning €150 per month. We did not borrow the money for some fancy purchases, but to pay my medical treatment.” a worker told our researcher.

Apart from taking out loans, workers and their families survive despite poverty wages due to subsistence agriculture, conducted outside the long hours in the factory, and through family members migrating to Western Europe in search for jobs. Almost every other worker interviewed reported having family members working in construction or agriculture in, for example, Italy or France. Labour migration to the West is a direct consequence of poverty wages. One worker invited brands „who have their garments assembled in our factory to try supporting their families on our salaries, for just one month.”

Apart from low salaries, workers from half of the researched factories report unpaid overtime, as well as non-functioning ventilation and air conditioning in a country where summers can be scorching. The research also found cases of forced overtime and limited or a lack of access to water. All workers complained about being bullied: they are verbally abused, harassed, and constantly threatened with dismissal.

Bettina Musiolek, one of the authors of the report, summarizes: “Garment brands often pride themselves on bringing employment to countries in dire need of it and offering women, especially, a way out of poverty. Our research shows that sewing for factories that produce for Western European fashion brands in Romania does not lift workers out of poverty – and they are forced to survive by taking on debts and separating  families. None of the brands buying clothes from Romania have engaged with labour and human rights violations in Romania in any effective way. It is high time for the EU to introduce binding Human Rights rules along supply chains and to address the wide divergence within the continent. In one part – in Western Europe – statutory minimum wages are poverty-proof. In another part, the statutory minimum wages are even below EU’s own poverty threshold.”

Clean Clothes Campaign asks the EU to implement its „European Pillar of Social Rights”: A EU minimum wage policy is needed to ensure that all minimum wage setting in member states guaranties the implementation of the human right to a living wage as well as the European Pillar of Social Rights, Chapter II, 6 “wages”: “Workers have the right to fair wages that provide for a decent standard of living. (…) In-work poverty shall be prevented.”.

Clean Clothes Campaign’s pledge to candidates for the EU-Parliament can be found here, where there is also detailed wage data and EU’s poverty thresholds listed.