“We go as far as brands want us to go” 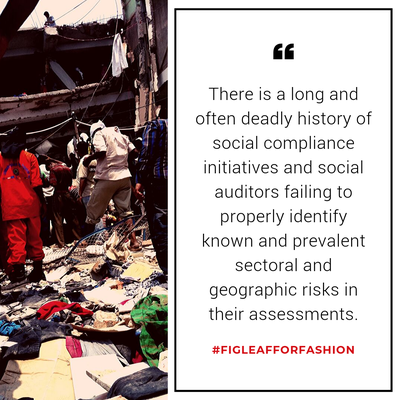 Evidence presented throughout the report clearly shows how the social audit industry has failed spectacularly in its proffered mission of protecting workers’ safety and improving working conditions. Instead, it has protected the image and reputation of brands and their business models, while standing in the way of more effective models that include mandatory transparency and binding commitments to remediation.

The report offers glaring examples of corporate negligence through case examples from the past decade including the Ali Enterprises factory fire in Pakistan in September 2012, in which over 250 workers died, unable to escape due to bars on exits and windows; the devastating collapse of the Rana Plaza building in Bangladesh in April 2013, which killed 1,134 workers and left thousands more injured and traumatised; and the July 2017 boiler explosion in the Multifabs factory in Bangladesh, killing and injuring dozens of workers. Each of these factories had been assessed and declared safe by several of the prevailing auditing companies, including TÜV Rheinland, Bureau Veritas, and RINA, using the standard, methodology and guidance of leading compliance initiatives such as amfori BSCI and SAI. In the cases of both Ali Enterprises and Rana Plaza, accredited auditors had deemed these facilities safe just weeks or months before they were reduced to ruins. In terms of Ali Enterprises, this assessment was made by auditors who reportedly never even visited the building.

These foreseeable and avoidable disasters exemplify systemic failures of corporate-controlled social auditing; an industry which in the words of one auditor goes “as far as the brands want us to go”. This industry is operating with impunity; there have been few, if any, negative repercussions for the auditing companies and social compliance initiatives involved in these deadly disasters. In fact, these initiatives continue to grow, with revenues and profits of the industry key players increasing over the years, in tandem with the growing number of audited factories. The industry has been able to keep these many failings under the radar because of its notorious lack of transparency and the opaque chains of accountability which preclude sharing any outcomes with the outside world, including the workers whose rights, lives and health are at stake. The structural causes of these social auditing failings, and the ways in which these should be addressed, are explored throughout the report, with extensive recommendations offered to numerous industry stakeholders, including calls for more transparency, accountability, and genuine worker involvement.

Ben Vanpeperstraete, lobby and advocacy coordinator at Clean Clothes Campaign, an author of the report says: “Twenty years of CSR has failed to improve labour conditions, and will continue to fail until there is an overhaul of the prevailing social auditing regime. Brands cannot be trusted to regulate themselves. Binding regulations with the threat of sanctions and worker empowerment via unions are the only mechanisms that can ensure brand responsibilities are taken seriously, due diligence is performed and workers lives are protected.”

Kalpona Akter, of the Bangladesh Centre for Worker Solidarity, who has been intensely involved in the struggle for justice for the families affected by the Rana Plaza collapse: “It is essential for people to understand that the social auditing system is deadly by design. Auditors do not have the skills, time, or incentives to properly detect unsafe buildings, but they do issue reports that reassuringly tell brands that there's nothing to worry about. The Rana Plaza building collapse was a man-made disaster and completely preventable. Brands were wilfully blind to the factory conditions, which were just not detected or ignored by the social audits they commissioned. It is startling that no one - not a brand or an auditing firm - was held to account for the massive loss life. We need laws that hold these corporations to account for their negligence.”

Garrett Brown, Coordinator of Maquiladora Health & Safety Support Network, founded in 1993 with workplace safety projects in Mexico, Central America, Indonesia, China, Vietnam and Bangladesh, says: “This comprehensive, well-documented report illustrates in living colour how and why corporate social responsibility programmes have failed to protect the health, safety, and legal rights of global supply chain workers. What is missing in CSR auditing – which has emerged with the alternative of worker-driven social responsibility – are competent and uncorrupted auditors; accurate and comprehensive inspection reports; and genuine participation by workers, the most knowledgeable and affected party in the monitoring process. The fact of the matter is that the real goal of CSR is not to protect workers, but rather to protect brand image and corporate reputations while continuing to capture maximum profits out of the brands’ global supply chains.”

The full report and summary briefing are available under the resources part of this website.