Seven years since at least 112 workers were killed and many more injured in a fire in the Tazreen Fashions factory in Bangladesh, there is still no system in place offering financial security to workers injured at the workplace and families of workers killed on the job. If a worker loses their health or life on the job, they or their families will face the same insecurity and struggle for compensation as the Tazreen families did seven years ago. Years of planning to create a nation-wide employment injury insurance scheme have still not led to tangible results. 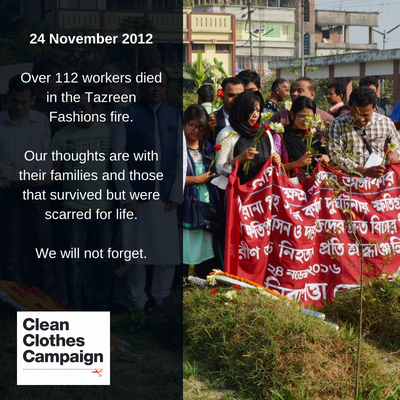 Sunday 24 November 2019, family members and labour activists in Bangladesh and around the world will commemorate the workers who died seven years ago – trapped in a building with insufficient fire exits and barred windows. This anniversary is a reminder of what families have to go through after a workplace tragedy.

Amin Amirul Haque, President of the National Garment Workers Federation NGWF said: “The families affected by Tazreen had to wait and struggle for three full years before campaigning had ensured enough resources for their compensation payments. It is inconceivable that while mourning a lost one you also have to scramble for a living, because a factory owner or buyer is not taking responsibility. This lack of predictability is still not solved.”

In the same year that the Tazreen families finally received compensation, the government of Bangladesh promised to end this insecurity by creating a national employment injury insurance scheme. This would ensure that in the future workers and their families would not have to spend years in uncertainty and dire poverty after breadwinners were struck by workplace injury or death. Four years on, this commitment has yet to materialize, meaning workers are still at the mercy of their factory owners or brands in order to be compensated after workplace incidents.

In November 2018, the International Labour Organization published a detailed Technical Report showing the way towards a phased introduction of an employment injury insurance scheme. This year however again a Tazreen anniversary seems to come and go without a system in place.

“It is unfathomable why so many years after the initial commitment, there is still no employment insurance system in place. It is not only very feasible, but moreover benefits everyone: workers and their families will have financial security at a very difficult moment in their lives, factory owners will be able to share responsibility and financial burden, brands and retailers will against low costs be assured that they are fulfilling their due diligence obligations, and the government of Bangladesh will be able to show it is good for its word,” says Christie Miedema at Clean Clothes Campaign.

“It is high time that all stakeholders act in their own interest and make this promise into a reality before the next review of Bangladesh’s sustainability promises, which was originally due this year and should now take place before April 2020. The International Labour Organization, apparel companies with major sourcing volumes in Bangladesh, the employers, and the government itself have all indicated their willingness to create such a system. The time to start a phased introduction that can grow into a full-fledged system is now – workers can not longer wait.”