Progress made since Rana Plaza collapse at risk

The safety programme that has been instrumental in restoring international trust in the Bangladeshi garment industry after the deadly Rana Plaza collapse of 2013 risks being expelled from the country without a credible alternative in place. 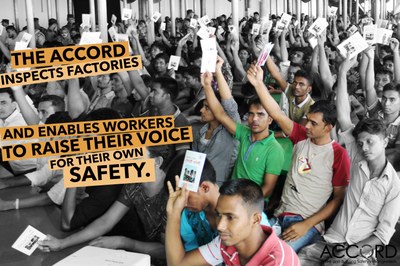 Negotiations between signatories of the Bangladesh Accord on Fire and Building Safety and the government of Bangladesh have grounded to a halt, as Bangladeshi authorities have thus far refused to accept any other outcome than a swift and unconditional handover of the Accord’s tasks to national inspection entities.

Recent media reports in the Bangladeshi press suggest that factory owners and the authorities are insisting the Accord should transition its tasks to a national inspection body by a fixed date and are not accepting any conditions on the readiness of that body to carry out those tasks. If the government of Bangladesh and factory owners indeed manage to expel the Accord, it will reverse significant advances made to factory safety over the past five years and create irreversible reputational harm to the garment industry itself.

As witness signatories to the Accord, Clean Clothes Campaign, International Labor Rights Forum, Maquila Solidarity Network, and Worker Rights Consortium support the eventual transition of Accord inspection tasks to Bangladesh’s national regulatory bodies, including the Remediation Coordination Cell (RCC). Yet, such a process must be made conditional on clear and concrete readiness criteria, as formulated and overseen by the International Labour Organization.

As is widely recognized, the Bangladeshi inspection bodies do not yet have the capacity to oversee the about 1600 Accord-covered factories. This would be in addition to the factories already under the government’s purview, of which only a little over one third of all safety renovations have been completed. Bangladeshi authorities have also not presented any viable alternatives for worker safety training and the worker complaint mechanism offered by the Accord.

If its Dhaka office is forced closed, the Accord will continue to operate, headquartered at its international office in Amsterdam. As a legally-binding agreement between brands and trade unions, the Accord’s mandate remains valid until 2021, and signatory brands cannot withdraw from the programme before having fulfilled all their obligations.

Carrying out its inspection program from outside Bangladesh would come at a high price. The Accord would continue to deliver protections to workers by contracting international engineering firms. Without permanent engineers on the ground, however, the Accord would face serious limitations to its ability to monitor and verify remediation progress at Accord-covered factories.

The Accord’s Chief Safety Inspector has announced that in the event of a move to Amsterdam, he would be forced to declare hundreds of poorly performing factories ineligible to sell product to any of the Accord’s 192 signatory brands. Because the programme would no longer be able to provide necessary help to complete life-saving renovations in a timely fashion, it could therefore not assure signatories that these factories are safe sourcing destinations.

Such a situation – in which brands would lose suppliers, factories would lose buyers, workers would lose jobs and factories would become more unsafe – benefits no one: not the brands, not the government, not the factory owners, and least of all the workers. We therefore call for a political solution to make a genuine transition based on real readiness criteria and solutions for all of the Accord’s vital tasks.

At no point in time will a transition of any tasks to the Bangladesh government mean that brands sourcing from Bangladesh are absconded of their responsibility to keep the workers in their supply chain safe. Brands’ due diligence obligations continues unabated, meaning that they will have to develop solutions where safety appears to backsliding.

There has been widespread international support for the unfettered continuation of the Accord’s work until the national inspection bodies are judged ready to assume that role. This week, 190 investors representing 3.1 trillion USD in assets under management clearly expressed their support for a conditional transition with sufficient time for the national inspection body to meet the necessary conditions to be able to carry out the Accord’s work.

If the government of Bangladesh chooses to ignore these appeals, it is up to Bangladesh’s trading partners and buyers to take a stand, including the governments of the UK,Canada, and the Netherlands, as international funders of the RCC.

UPDATE 18 February 2019: The ruling of the Appelate Division of the Bangladesh Supreme court is postponed to 7 April 2019.