A building safety initiative launching in India today, aimed at improving safety for workers in the country’s garment industry, is set on a path to ignore workers’ voices and replicate mistakes from the past. Although the “Life and Building Safety Initiative” professes to learn from the programme that made factories safe in Bangladesh after the Rana Plaza building collapse, it ignores its most vital elements. 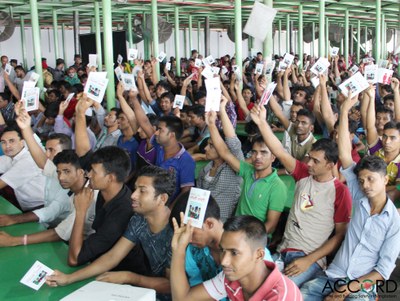 Workers participate in an all-staff safety meeting organised by the Bangladesh Accord.

Building safety in the garment industry became a world-wide concern after 1,134 workers died in the 2013 Rana Plaza building collapse in Bangladesh. This led to the establishment of the Accord on Fire and Building Safety in Bangladesh (Accord), a ground-breaking legally-binding and enforceable programme with unprecedented levels of transparency and worker involvement. A group of largely North-American brands and retailers shied away from joining over 200 of their peers in signing the Accord and established their own non-binding, less enforceable, less transparent, and less inclusive initiative, called the Alliance for Bangladesh Worker Safety (Alliance).

“It is telling that four of the brands now behind the LABS initiative were main movers behind the Alliance as a business-controlled alternative to the Accord,” said Liana Foxvog of the International Labor Rights Forum. “Walmart, Gap, VF, and Target have consistently rejected our calls to sign the Bangladesh Accord -- why would the initiative pushed by them now be trusted to draw on the lessons of the Accord and put workers’ well-being over business interests?”

LABS promises to “build on the learnings and experiences” from Bangladesh. This led several news outlets to report that LABS’ programme is based on the Accord experiences or “taking the Accord” to other countries. However, LABS is a voluntary brand initiative without union participation that lacks binding mechanisms to hold the participating brands accountable. Even though LABS claims to have transparency as one of its core principles, vital resources that LABS promises to make public, such as its standards and factory assessments, are currently still in the members-only part of its website.

Most strikingly, instead of LABS replicating the Accord’s strong mechanisms to enforce safety measures in factories through collective member brand leverage, LABS continues the corporate practice to audit and ignore. Even if factories consistently fail to remediate the safety issues uncovered by LABS, the programme leaves it to member brands’ individual decisions whether they want to continue to source from these suppliers. Instead of employing and training its own engineers like the Accord does, LABS places its trust in the same corporate social auditing firms that failed to prevent large-scale casualties in the past, including the foreseeable disaster of the Rana Plaza collapse and the deadly factory fires at the Tazreen and Ali Enterprises factories of 2012.

“LABS’ programme of inspecting factories without ultimately ensuring that the found safety risks are addressed, is a disaster waiting to happen. Brands like Walmart, whose audits failed to address the clear death trap of the Tazreen factory, should know that such false assurances have deadly consequences. The Bangladesh Accord is a carefully designed package of measures that circumvents the many flaws of the corporate social auditing system. Just shopping some elements from it will render the result meaningless. A safety initiative without the same level of worker participation, transparency, and binding and enforceable elements is only perpetuating business-driven initiatives of the past that failed to prevent thousands of worker deaths,” says Ineke Zeldenrust of Clean Clothes Campaign.

“LABS Initiative for India is an eyewash and adds no value. It is part of the multi-billion dollar PR exercise brands do to cover up and evade serious commitment to improving inhumane working conditions. A credible, efficient, and enforceable mechanism can only be built through an agreement with unions on the ground. This attitude of contempt and disregard for unions only demonstrates brands' deep disrespect for and insensitivity to workers,” says Ashim Roy of Indian trade union Mill Mazdoor Panchayat.

The announcement that the initiative will soon expand its operations to Pakistan is particularly concerning as it might compete with or even overshadow union initiatives to replicate the Accord model in the country.

“Pakistan’s worst ever factory fire incident happened in September 2012 when over 250 workers burned alive in a fire at the Ali Enterprises factory in Karachi. Since then nothing has changed in terms of buying practices and business attitude. Initiatives such as IDH are just cosmetic exercises. Any non-consultative and non-participatory initiative would simply be unacceptable. It is time for genuine actions on the part of both government and non-government initiatives,” says Zulfiqar Shah of Pakistan Institute of Labour Education and Research (PILER).

“In Pakistan, social auditing has failed completely, with Ali Enterprises as the clearest evidence. Unfortunately, business as usual continues without any participation from the workers’ side and undermining national labour laws in producing countries. LABS will fail to protect workers in Pakistan if it does not follow lessons learned from Bangladesh Accord. For any meaningful change in the field of safety, it is important to allow workers to express their views freely. This cannot be ensured without genuine freedom of association and collective bargaining at workplaces,” says Khalid Mahmood of the Pakistani Labour Education Foundation.

“True worker safety, securing the lives of millions of workers in garment supply chains, can only be achieved if workers and their representatives are involved and have a meaningful say in the creation of any mechanism or scheme along with other stakeholders,” says Nasir Mansoor of the Pakistani National Trade Union Federation.

Apparel companies should genuinely learn from the advances made by the Accord and strive for safety initiatives that are enforceable and contain worker representation. This means that, in particular in Pakistan, companies should support the grassroots initiatives under development rather than join voluntary, unenforceable business-driven programmes such as LABS.