Our latest report reveals that no major clothing brand is able to show that workers making their clothing in Asia, Africa, Central America or Eastern Europe are paid enough to escape the poverty trap. That means that apparel brands and retailers are violating internationally recognized human right norms, and their own Codes of Conduct. 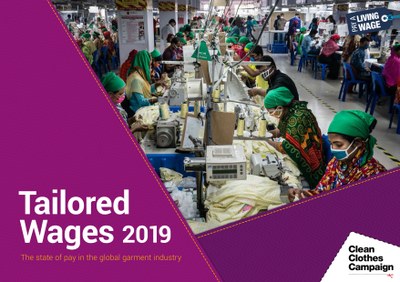 The report ‘Tailored Wages 2019: The state of pay in the global garment industry’ analyses responses from 20 top clothing brands about their progress in implementing a living wage for the workers who produce their clothes. Whilst 85% of brands had some commitment to ensuring wages were enough to support workers’ basic needs, no brand was putting this into practice for any worker in countries where the vast majority of clothing is produced.

Anna Bryher, the report's author, said: “Five years on from our previous survey on this topic, no brand was able to show any progress towards a living wage being paid. Poverty in the garment industry isn’t improving, it’s getting worse. This situation is urgent. Our message to the brands is that human rights can’t wait and workers making the clothes sold in our shops must be paid enough to live with dignity.”

Of the 20 companies surveyed, 19 received the lowest possible grade in the report. This means that they produced no evidence that any worker making their clothes was paid a living wage anywhere in the world. These companies are: Adidas, Amazon, C&A, Decathlon, Fast Retailing, Fruit of the Loom, GAP, G-Star RAW, H&M, Hugo Boss, Inditex, Levi Strauss & Co., Nike, Primark, Puma, PVH, Tchibo, Under Armour, and Zalando. The exception was Gucci, which was able to show that, for a small proportion of its production in Italy, national wage negotiations mean a family can live on a wage paid in some areas in the South and Central regions.

“Voluntary initiatives have failed to deliver human rights for workers,” said Neva Nahtigal from Clean Clothes Campaign International office. “The global economic model that drives down prices and pits low wage country against low wage country is too strong. It’s a fact that the workers who make almost all the clothes we buy live in poverty, whilst huge brands get rich from their labour. It is time for brands to be held accountable for the system of exploitation that they created and profit from.”

Minimum wages in Bangladesh are less than a quarter of a living wage. In Romania and a number of other Eastern European countries, the gap is even greater, with workers earning only a sixth of the amount they would need to live with dignity and support a family [3]. As a result, workers are forced to live in slum housing, and suffer from malnutrition and debt, and are frequently unable to afford to send their children to school, all while working excessive overtime hours just to try to make ends meet.

One Romanian garment worker, speaking about the desperation of their situation (for the Romania country profile published in May), said, "If there was another employer in this region, who paid even a little bit more, everyone would leave the factory. Everyone. But ours is the only one. What will become of us? What else could we do? This is a desperate region. The only other option to survive would be stealing. We want to earn money honestly. So we have to stay in this factory.” A second added, “I would like to invite any brand who has their garments assembled in our factory to try supporting their families on our salaries, for just one month.”

Anna Bryher added, "Global brands and retailers have known for years that the wages they pay are not enough for workers to live on, yet they continue to make empty promises while raking in massive profits. If brands are genuinely committed to paying a living wage, they should stop talking about it and just pay it. Pick a credible benchmark, tell suppliers, and raise prices accordingly. Start now, with the 50 biggest suppliers, and make the payroll records public to prove it is really happening. It’s not that complicated. Just pay people more money."