I made clothes for Uniqlo but I didn’t get paid

I am Warni Lena from Indonesia. I made clothes for Uniqlo but I didn’t get paid. While you shop clothes at a bargain for the holiday season, there’ s a story I think you want to hear. 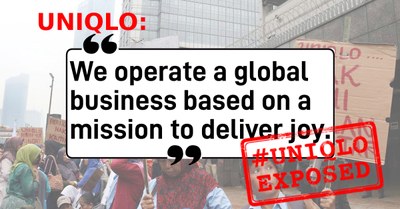 Whether you buy a new wardrobe or not won’t change my situation, but knowing what happened to me might get you involved. My story is about Uniqlo, the Japanese brand that’s opening stores like mushrooms in Europe. Today shareholders of its billion dollar parent company Fast Retailing get together in Japan during the annual shareholders meeting to discuss the numbers. I have one amount in mind, and that’s USD 5.5 million. It’s the exact amount of what Uniqlo owes me and my colleagues. I will tell you why, but let me first tell you about some other numbers.

For about 22 years I worked at a factory on Java in Indonesia. A few years ago, we started to make knitted sweaters for Uniqlo. I recognised these sweaters when I was in Japan and Europe. My life changed drastically when Uniqlo entered the factory. Our daily targets went through the roof and we were not allowed to use the bathroom much anymore. In order to live up to the demand, we had to finish orders by doing overtime hours, which we often didn’t get paid.

In April 2015, we went to the factory only to see that it closed over night. No none had told us the factory had been in bad weather. The order sheets we later obtained confirmed what we already thought, that the factory closures followed a sudden bankruptcy just months after Uniqlo withdrew their business from the factory and that the brands Uniqlo and S.Oliver collectively retaining well over 50% of the factory production volume in 2014. Other court documents from the bankruptcy proceedings confirmed our description of how business practices of buyers significant contributed to the our factories’ closure.

Without our legally required severance payments and still waiting for several months of wages, our mostly women workforce was forced to occupy the factory floors so we could get some money from the sale of the machines. We slept under a make shift roof, on plastic sheets for months because we couldn’t pay our rent any longer. My daughter went to school straight from the factory floor, where we all sat and cooked together.

Many of us worked at the factories for a long time, some of us up to 25 years, so we are now considered middle aged with little perspective of finding other jobs in an industry that prefers to hire young women. Nearly 600 of us live in destitute conditions, forced to accept jobs which pay well below the minimum wage. In 2017 we started the campaign, and contacted organisations to support us. While I’m campaigning for my rights with all the international groups, I baby sit during the day and sell sausages at night to feed my daughter after my husband died when I was still making Uniqlo sweaters.

Since we started the #PayUpUniqlo campaign in 2017, Uniqlo has been trying to buy their way into being seen as a reputable company. In July this year, UN Women announces a partnership with Japanese clothing giant Uniqlo, owned by the richest man in Japan Tadashi Yanai. He is worth nearly 25$ billion. He is also the largest shareholder of Fast Retailing. A few months later in September, the International Labour Organization started the biggest private sector funded project, with an injection of $1.8 million for social protection and the promotion of employment.

Partnerships such as these mean little to me. Not to me, nor to my female colleagues. Uniqlo should not be allowed to do this. Despite of these programs that are supposed to protect us, it’s still us, the women workers at the bottom of the chain, paying the ultimate price.

Accepting donations from companies contributing heavily to a race to the bottom, affecting the most precarious working conditions, pushing women like me down the spiral of poverty comes with an obligation to make sure me and all the other women and girls get what we worked for.

To the UN and the ILO, who developed these programs essentially in my name, I’m saying: support me. Me and the other women can use that money to rebuilt our lives. For Uniqlo this is small change. For women like me it’s employment and a future.