The government of Bangladesh is using proceedings before the Supreme Court of Bangladesh to prevent the Accord on Fire and Building Safety, the safety programme established in the aftermath ofthe Rana Plaza collapse, from operating, thereby putting workers’ safety at risk. 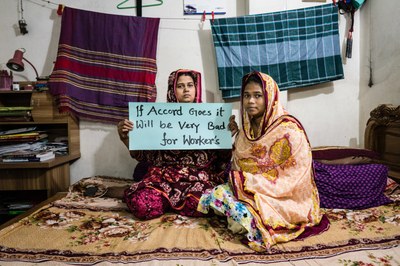 Workers are speaking up for the Accord - photo: Kristof Vadino

The government of Bangladesh is using proceedings before the Supreme Court of Bangladesh to prevent the Accord on Fire and Building Safety, the safety programme established in the aftermath of the Rana Plaza collapse, from operating, thereby putting workers’ safety at risk.

The government’s justification for trying to end the Accord’s work depends entirely on its claim that the government is ready to assume responsibility for the 1,688 factories under the Accord’s purview, but research published today by the Accord’s NGO witness signatories – Clean Clothes Campaign, International Labor Rights Forum, Maquila Solidarity Network, and Worker Rights Consortium – shows a shocking level of unreadiness, as also reported in the Guardian yesterday. In particular, we find that:

Both the brand and labour signatories of the 2018 Transition Accord are committed to transfer the inspection and remediation work once a credible national regulatory agency is in place. Currently, international stakeholders across the board agree that Bangladesh’s national inspection agencies do not yet meet the expected standard when it comes to transparency, monitoring, or enforcement. The government’s inspection agencies lag far behind in completing the remediation work at garment factories producing for non-Accord brands, or for the domestic market. The government of Bangladesh, however, is asserting that its inspection bodies are ready to take over the work and the Accord is no longer needed and is pushing for a swift transfer of not only the inspection and remediation work, but also of the safety complaints process and the safety training programmes carried out by the Accord and has refused to discuss a conditional process based on an evaluation of readiness criteria.

Signatory brands are speaking up not to transition any tasks from the Accord to national inspection agencies until it is fully clear that the latter are up for the task. Clean Clothes Campaign is collecting these statements on behalf of all witness signatories here.