A fire in a Bangladeshi garment factory in Dhaka this week injured eight people, local media reports say. This tragic incident happened during a period of uncertainty and negotiation about the future of the Accord on Fire and Building Safety in Bangladesh: the one international safety programme that has significantly improved worker safety in the garment industry since the 2013 Rana Plaza collapse. 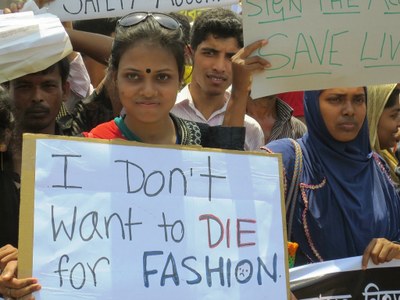 This week’s fire confirms that, despite the Bangladesh government’s assertions to the contrary, national inspection bodies are not yet ready to take over this important work.

Bangladeshi media report that the fire broke out on 4 March in the Anzir Apparels Ltd factory in Baipail, Ashulia, on the outskirts of Dhaka. Anzir Apparels (Unit 1) is listed on the website of the Alliance for Bangladesh Worker Safety, a safety programme established by Gap, Walmart, VF, and other North American brands in response to the Rana Plaza collapse.

According to the Alliance website, the factory failed to make adequate remediation progress after inspections in 2014 revealed massive safety problems. In response, the Alliance removed it from its factory list, meaning that none of the Alliance brands could produce there. The factory then closed in March 2016. Issues identified included a lack of an adequate fire alarm system, fire-fighting equipment, and safe emergency exits.

According to the workers, the factory did not stay closed, but re-opened two months later. An Accord brand placed an order in 2017, but within three months the factory again closed instead of remediating as required. This week’s fire shows that the factory started producing yet again; according to the workers already in 2017. It did so without properly addressing the glaring safety issues that were identified in the original inspection reports that were made publicly available and shared with the authorities. The inspection body that should have overseen this, the Bangladesh Department of Inspection for Factories and Establishments (DIFE), seems to have registered the factory’s resumed activity, but failed to take any action.

On its website and on the website of the Remediation and Coordination Cell (RCC), an umbrella organization for Bangladesh’s inspection authorities, Anzir Apparels Unit 1 is listed as ‘in operation’, showing a summary of the initial damning inspection report by the Alliance, but without further signs of action.

The factory not only disregarded safety measures, but also workers’ rights. It recently changed its name to BP Fashion in an apparent move to break the factory union, that is registered under the factory’s old name. The union has not been able to register again in the supposedly ‘new’ factory.

This is particularly worrying as the ability of workers to organize is central for workers to safeguard their own safety by raising dangers collectively and refusing unsafe work. The Accord recognizes freedom of association as a central part of its mandate. National inspection bodies thus knowingly allowed a factory to operate that had repeatedly failed to address alarming safety hazards when requested and has been active for all these years, except for two brief spells in 2016 and 2017.

Such a flagrant lapse in responsibility once again demonstrates that Bangladesh’s national inspection authorities are dangerously behind on inspecting, monitoring, and enforcing remediation in the garment factories under their purview. This observation is demonstrated by numbers; for example, according to a September 2018 report co-signed by the government of Bangladesh, only 29% of initial safety defects found in factories covered by national inspection bodies have been remediated. Many of the safety issues that remain pending constitute immediate dangers to garment workers and most of the remediation deadlines have expired years ago.

Assessment of the situation is further hampered by a lack of transparency: not a single follow-up inspection report is publicly available. Over the past few months, the government of Bangladesh has attempted to assure brands, foreign governments, and journalists that its national inspection agencies are up to the task of inspecting and enforcing remediation in all of the country’s garment factories. It has repeatedly stated that it is high time that the international safety programmes that were created in response to this tragedy hand over their responsibilities to national inspection agencies; applauding the Alliance for rounding up its activities and actively attempting to curtail the Accord.

Ineke Zeldenrust of Clean Clothes Campaign says: “In light of the national inspection bodies’ lack of capacity once more demonstrated by this fire, and further exacerbated by the fact that they also carry the responsibility for all other industrial buildings in the country, at this time any handover of Accord covered factories to these bodies would be extremely irresponsible. There can be no further transfer of responsibilities until both the government and the Accord have fully remediated all factories under their purview.”

The witness signatories to the Bangladesh Accord – Clean Clothes Campaign, International Labor Rights Forum, Maquila Solidarity Network and Worker Rights Consortium – call upon the government of Bangladesh to respond to this fire by publicly and unconditionally supporting the Accord’s life-saving work in Bangladesh until the job started since the Rana Plaza collapse is fully completed.

Liana Foxvog of International Labor Rights Forum says: “This fire should be an incentive for the government of Bangladesh to put its own shop in order: speeding up and improving follow-up inspections, enforcement, and transparency. The Accord in turn should make haste in implementing its plan to broaden its scope to include boilers and related industries, and continue to offer its support to build up national inspection capacity. The Accord should also seriously investigate complaints from factory owners about unfair pricing that restricts remediation efforts.”