Adopting a Gender-Sensitive approach to Living Wages is imperative to Women Worker’s Rights. 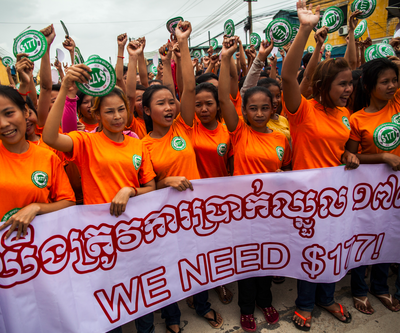 The current living wage debate provides the opportunity to improve the lives of millions of garment and footwear workers and their families, but only if the debate and calculation methodologies adopt a gender-sensitive approach that places the specific situation of women at the centre of the discussion.

The global garment and footwear industry which relies heavily on the work of women, who represent up to 80% of its global workforce, is characterized by a high percentage of informal or semi-formal employment arrangements, including piece rate payment systems, short-term-contracts, unrealistic daily targets and unpaid overtime, home-based work and contracting work through work agencies. Moreover, with the prices of clothes and shoes constantly falling and increasing competition in production countries, minimum wages are routinely frozen and often fall below the national poverty line. Gender discrimination within factories mean women are more affected by low wages; Supervisor positions and jobs paid on an hourly, instead of piece, basis tend to be occupied by men and contracts are often not renewed when a women gets pregnant, depriving them of their social security. Migrant women workers are especially prone to exploitation with their status and identity as workers subject to constant legal and economic insecurity, creating a whole tier of workers subjected to conditions akin to modern slavery.

While income poverty amounts to financial constraints resulting in the need to work overtime and engage in multiple jobs, it also has direct consequences that go beyond purely financial aspects, leading to a whole set of poverty related daily challenges. This includes limited access to health services and education, lack of social security, poor housing, and limited participation in cultural and political life. Women in most societies are expected to care for not only children but also elderly or sick family members, not necessarily living in the same household, particularly in countries lacking state organized social infrastructure. In addition to working one or multiple paid jobs and doing unpaid care work, income-poor women are also often forced to invest a disproportionate amount of time in domestic work. The need to constantly cut costs and shopping for the cheapest possible food, for example, takes much time. As a result, garment workers all over the world are not only income‐poor, but also completely time-poor.

The background paper “Will women workers benefit from living wages?” by Christa Luginbühl addresses the need to adopt a gender-sensitive approach in the living wage discourse, also looking at the implications this approach has on the methodology of calculating a living wage, identifying three main issues: First, the basic food basket should not solely reflect the lowest possible prices, this is an unjust and unrealistic calculation given the reality women workers face. Second, there is a need for a broader definition of ‘family’ that includes family care networks that exist beyond the immediate household. Third, precisely because of these societal expectations on women to perform care work, it is crucial that the living wage estimate reflects unpaid care work. The ratio of wage earner to wage dependent used to determine the living wage estimate should therefore not be based on average household sizes and average employment participation rates by household but take into account the resources needed for unpaid caregivers. Regarding measures to implement a higher living wage, the paper calls for brands to make a public commitment to a clear living wage benchmark, and underlines that the large wage hikes needed to reach a living wage that serves women workers and their families are possible, even without higher retail prices or lower profits, if standard pricing models are changed to reflect fixed margins in production chains.

Improving the circumstances for women workers in the garment industry means ensuring that they receive a living wage that reflects their specific situation. It is also essential to scrutinize and challenge the gendered division of work into paid and unpaid work, and the societal expectations and pressure that go along with it. A living wage approach that focuses on supporting the full capabilities of women workers can to that end contribute to creating the space needed for a wider societal debate regarding the work distribution among men and women.

A living wage is a central enabling human right and fundamental necessity for society and can be a powerful tool for improving the working and living situation of women, but only if a gender-sensitive focus is applied.