by neva — last modified 2018-12-11 06:21
Clean Clothes Campaign International office declined an invitation to the “Fair living wage summit” that H&M is organizing on 11 December in Phnom Penh, Cambodia. We want to make sure that our absence is not misrepresented at the summit or in other situations and are therefore sharing some background that led to that decision. 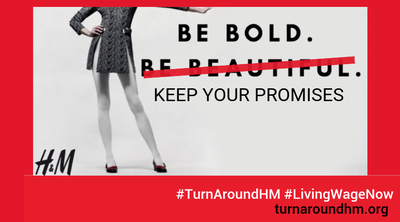 According to the invitation, the summit in Cambodia is supposed to “provide H&M stakeholders … with an understanding of how H&M and its partners have been working on the Fair Living Wage Roadmap launched in 2013, and to discuss what the future looks like for achieving living wages globally”.

Given our central focus, Clean Clothes Campaign (CCC) is clearly a relevant stakeholder. In addition, we take our mission of improving the garment industry too seriously not to pursue viable opportunities to do so. We therefore thoroughly considered the invitation and the implications of our potential attendance and did not take the declination lightly.

However, the nice sounding description of the summit conceals important issues that will not be fixed at or by this event at a former garment factory -- not far away from where thousands of women still regularly work overtime sewing H&M’s clothes for wages that make meeting their families’ basic needs a constant struggle and, for many, simply not possible.

H&M unveiled the Roadmap in 2013, following consultations with CCC as well as with many other stakeholders. This included a stakeholder meeting at H&M in Stockholm where not only the International office but also several CCC member organizations were present. H&M publicly announced the Roadmap at a meeting organized by the Dutch and German governments, that CCC also invested substantial time and effort in.

Once the actual Roadmap was revealed, CCC received it with cautious optimism. We pointed out that it lacks concrete living wage benchmarks and clarity on the involvement of local unions and on how pilot projects would be scaled up.

Nevertheless, we recognized that H&M took an important step in the right direction: by publicly acknowledging their responsibility for the workers who make H&M products and, specifically, for ensuring that the workers’ human right to a living wage is respected.

In the following years we carefully monitored H&M’s reporting on its living wage work and drew upon our network’s presence in many production countries to gain an understanding of how H&M was going about the Roadmap implementation. Unfortunately, we soon had ample reasons for disappointment. Many of them only became more pronounced as time went by.

We attempted to influence H&M’s practices through direct dialogue, both over email and through meetings, such as the Living Wage Now forum we organized in 2015; issued public statements; and published devastating research findings about labour rights violations at H&M’s supplier factories and the lack of progress on wages in Cambodia.

Finally, in March this year, we addressed H&M’s management with an open letter. We requested specific information that should already have been available to the public and spelled out the steps H&M would have to take to act on the 2013 living wage commitments in a meaningful way.

Following an underwhelming, formulaic response, and with the Roadmap having matured in public view for nearly five years, we launched the “Turn Around, H&M!” campaign in May that has further brought to light our key points of criticism as well as H&M’s (un)willingness to respond in a meaningful way.

Some of our key grievances with H&M’s approach to implementing the Roadmap are:

As the foundation for accountability, transparency is one of our main focal points. We have strongly and consistently argued for supply chain transparency and are a part of the coalition that initiated the ground-breaking Transparency pledge.

In view of this, we do not think that anyone should have to travel to Cambodia to understand H&M’s living wage work -- especially at the time when the self-imposed deadline for the fulfilment of H&M’s commitments is about to pass.

This is what we have repeatedly asked for:

Whereas H&M may make it seem that just about everything shall become clear at the summit, it is much more likely that that the audience will get mere crumbs of relevant information.

In any case, at the end of the Roadmap period, and considering the lack of transparency throughout its implementation, whatever H&M brings to the summit will be too little, too late for a meaningful discussion. It will likely be just enough for H&M to appear more “transparent” than most of the competition; but as the saying goes, the devil lies in the detail.

This brings us to our next main point of criticism and a detail H&M has been trying hard to make everyone forget: H&M’s broken commitment to 850,000 garment workers who were promised a living wage by 2018.

Correspondence throughout this year, our ongoing #TurnAroundHM campaign and H&M’s responses to the numerous media inquiries in the past months give a clear indication that these 850,000 workers’ crushed hopes are not of concern to H&M.

Instead of immediately taking decisive steps to actually fulfil that commitment H&M has been engaging in all kinds of rhetorical contortion to cover up its failure, trying to pretend that the commitment was never there in the first place – despite having received wide acclaim in the media around the world for this very same commitment back in 2013, as we documented in “Lost and found: H&M’s living wage roadmap”.

This is what it sounded like back then: “H&M's strategic suppliers should have pay structures in place to pay a fair living wage by 2018. By then, this will reach around 850,000 textile workers.”

By the time H&M published its latest Sustainability report, that commitment had been watered down to the aim of supplier factories representing 50% of product volume using the Fair Wage method, and H&M had removed the original Roadmap documents from their corporate website.

Whether or not “using the Fair Wage method” leads to the workers being paid a living wage by 2018 is not addressed at all in the report. H&M also does not address this in any of the subsequent public statement that were at least partially in response to the campaign we launched to bring the lives of those 850,000 workers and their families to the fore.

On the other hand, our field research in six factories that were covered by that commitment, and even H&M’s own wage data clearly show that wages at H&M supplier factories are nowhere near a living wage.

Thus, we arrived at the last main point we highlighted above: while engaging in a seemingly deliberate cover-up of the commitment to 850,000 workers, H&M has been claiming to have exceeded the goals set in 2013!

Whereas H&M’s commitment in 2013 was actual living wage paid by 2018, and even H&M’s own wage numbers show that is far from the current situation, H&M now only talks about various processes and methods and the workers reached by those.

H&M pre-emptively published these deceptive claims once we sent them our research findings about the wages that workers at H&M supplier factories are actually paid. In the case of the Bulgarian “gold supplier”, this is not even one-tenth of a living wage. Even in Cambodia, where H&M allegedly implemented its pilot projects and where the “fair living wage” summit will take place, interviewed workers making H&M clothes earn less than one-half of a living wage.

Despite our global campaign and over 140,000 signatures under the petition demanding a living wage without delay, H&M has stayed on the above-described course: selectively disclosing parts of the picture while obscuring and/or misrepresenting others, effectively trying to change history, and rendering all our good-faith efforts in engaging in dialogue in the lead-up to the Roadmap and the first years afterwards useless.

As a result of the outlined considerations this was our response to the invitation:

“We've discussed this invitation and concluded that we will have to decline.

When H&M made its public commitment five years ago to ensure living wages for all workers at gold and platinum suppliers by 2018, we had the basis for such a discussion to be meaningful. With that time-bound and specific goal, a dialogue on 'how to speed up progress' (the subject of the panel you invited me for) makes sense.

Unfortunately, H&M's public position now is to no longer recognize this commitment, which leads us not to see any real value in participating. Our views are very well known, as are yours. Repeating them once again at the event you are organizing will not bring us any closer to realizing the human right to a living wage for the workers making H&M products.

As we have been communicating to H&M for a long time, acting on the commitment H&M made in 2013 in a meaningful way would include:

If H&M demonstrates a real commitment to implementing these measures, we’d be happy to discuss this in more detail.”