by christie — last modified 2019-09-02 14:29
Contributors: 13f11af8dd02495ebe4dcf89231e1fc9
In an international week of events focusing on the deadly Ali Enterprises factory fire of 2012 a group of labour and human rights organizations tries to answer the question: if workers die stitching our clothes, who should be held responsible? 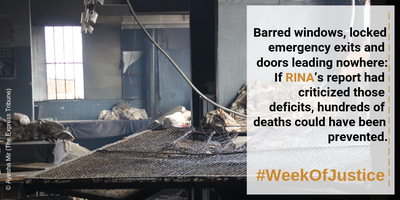 When on 11 September 2012 the Ali Enterprises factory burned down, killing over 250 workers, it was mainly producing for German retailer KiK. Furthermore, only weeks before the fire, the building had been certified by Italian social auditing firm RINA, on behalf of Social Accountability International. In the years since the fire, a coalition of labour and human rights groups, in close collaboration with the Ali Enterprises Factory Fire Affectees Association, have explored a joint strategy using different outlets to hold both KiK and RINA accountable and provide justice for the survivors and families that lost loved ones in the fire.

The struggle for full and fair compensation for the affected families is an ongoing process. Four years of campaigning and negotiating led to KiK signing an agreement to voluntarily pay in total 6.15 million USD in compensation for medical costs and the loss of income to injured survivors and affected families in the form of life-long pensions. This agreement did not include damages for pain and suffering. A parallel civil lawsuit against KiK, filed at the Landgericht Dortmund in Germany, therefore pursues these damages in order to create more clarity about legal accountability of corporations for their supply chain. Both the international compensation campaign and the pressure created by this legal action played a key role in putting the necessary pressure on KiK to come to the table and close the negotiations. This shows that legal cases can play an important role in worker's struggle for justice. The first public hearing in the court case for damages for pain and suffering is due to take place on 29 November in Dortmund.

As proven in a video simulation by research collective Forensic Architecture, small safety improvements could have saved hundreds of lives during the fire. To hold social auditing company RINA accountable for failing to report on these safety defects, in September this year a coalition of human and labour rights groups and the affectees’ association filed an OECD complaint against the company in Italy.

From 26 November until 4 December, guests from Pakistan closely connected to the case will travel through Europe. This morning they presenting their case at the UN Global Forum for Business and Human Rights and on Thursday they will attend the first public hearing of the court case in Dortmund. Furthermore they will appear at a range of public events in Germany and Italy. Saeeda Khatoon, one of the plaintiffs of the court case and representative of the Ali Enterprises Factory Fire Affectees Association, lost her only son in the fire. Nasir Mansoor is Deputy General Secretary of the Pakistani National Trade Union Federation and has been closely connected to the campaign on behalf of the affected families.

[Germany] Press conference ahead of the first hearing in KiK case

Who: Saeeda Khatoon (AEFFAA), Remo Klinger (lawyer of the plaintiffs), and others

Registration: not requested, but capacity in the courtroom is limited. There will be a security and ID check when entering the court.

Registration: The press conference will take place in an institutional hall that requires accreditation for journalists. To get the accreditation, an email has to be sent to francesco.verdolino@hotmail.it by 12 pm on the 30th of November including name, surname and any equipment for audio and video (cameras, cameras, ipad, etc.). Access to the hall - with proper clothing and for men suit and tie - is allowed up to the maximum capacity.