Global week of action against poverty wages at H&M

by neva — last modified 2019-09-02 14:31
Contributors: 13f11af8dd02495ebe4dcf89231e1fc9
From Delhi to London, from Washington, DC to Zagreb, with many cities in between, workers and activists are drawing attention to H&M’s broken commitment that 850,000 garment workers would be paid a living wage by this year. Expressions of solidarity with garment workers and denouncements of poor and precarious working conditions have also been coming from other parts of the H&M's global supply chain. 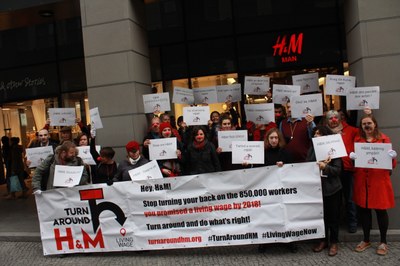 While H&M is gearing up for the end-of-the-year shopping season, activists and workers around the globe are joining hands to demand living wages and fair employment conditions throughout the supply chain of the Swedish fast fashion giant.

“I did not expect that working for H&M could totally upset my life,” writes a worker packing apparel parcels for H&M at a huge logistic hub Stradella in Italy in a letter to other workers in the H&M supply chain. “At the huge warehouse where I work … the day shift started at 4.30 a.m. and we did not know at what time we would be allowed to leave. Sometimes it was 4 hours of work, sometimes 12 in a row, you never knew.” The worker preferred to stay anonymous because the XPO, the company running H&M’s logistic hub, filed a lawsuit against 147 workers and their union fighting for improved working conditions.

This echos some of the garment workers' testimonies published earlier this year. For example, a worker making H&M clothes at Koush Moda, an H&M “gold supplier” factory in Bulgaria, said: “You enter the factory at 8 in the morning, but you never know when you will be able to leave. Sometimes we go home at 4 AM."

“H&M's current business model is squeezing workers at different levels of the supply chain. But seamstresses in garment factories, packers at logistic hubs and employees in retail shops all have the right to living wages and fair employment conditions,” says Deborah Lucchetti, spokeswoman of Campagna Abiti Puliti (Clean Clothes Campaign Italy). “Today we join hands with H&M retail trade unionists to bring our joint demands to the heart of Milan.”

This is the newest chapter of the “Turn Around, H&M!” campaign. From 23-30 November it will bring the reality of H&M’s working conditions and broken living wage promise directly to the consumers through a series of street actions. They will be kicked off in London, Madrid and Milan, and will spread to at least 30 more cities over the next days.

The global week of action is timed around the fifth anniversary of H&M’s unmet commitment that 850,000 workers would be paid a living wage by this year.

“All activities aim to ensure that H&M cannot hide from scrutiny based on the specific and time-bound commitment that H&M has evidently turned its back on, while making deceptive claims of having exceeded its goals! Anyone can do that if they also claim the right to move the goal post as they see fit, but we will not let that hypocrisy go unnoticed,” said Neva Nahtigal of Clean Clothes Campaign International office.

The latest global display of solidarity with the workers making H&M’s clothes follows the publication of research findings about the situation in six factories which were covered by H&M’s 2013 commitment.

“Workers revealed that H&M was nowhere near the payment of a living wage at its supplier factories ‑ to the contrary, many workers reported poverty wages and labour rights violations. We have every reason to believe that those findings reflect the broader reality: H&M took a lot of credit for its original commitment but has failed to deliver in the form of an actual living wage materializing in workers’ wallets,” said Bettina Musiolek of Clean Clothes Campaign who coordinated the research.

"In fact, even H&M's own wage data reveals that H&M is far away from securing workers at its supplier factories a living wage,” says David Hachfeld, Clean Clothes Campaign Coordinator at the Swiss NGO Public Eye. “Wage increases over the last few years are largely due to the increased legal minimum wages. Since 2015 wage progress has slowed down substantially. In the case of India (Bangalore) inflation-adjusted wages at H&M suppliers even dropped by four percent.”

In addition to the strengthening connections along the supply chain, ever more consumers are also expressing their solidarity with the workers and the expectation that H&M will ensure a living wage without further delay. The petition launched within the "Turn Around, H&M!" campaign has already drawn close to 140,000 signatures.