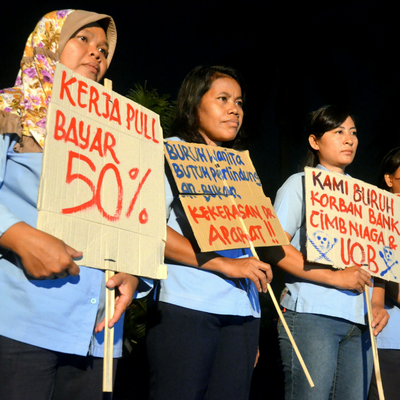 On April 10 2015 workers at the Jaba Garmindo factory were told that their employer had gone bankrupt and their factory was closing. Thus began what has now become a three year struggle to recover millions of dollars still owed to the mainly women workers, many of who had been employed at Jaba Garmindo for at least a decade.

UNIQLO was a major buyer at Jaba Garmindo in the three years prior to its closure, representing almost 40% of production in 2014. In their marketing  the brand tries to portray their business model as ethical and sustainable. Workers report that the arrival of the Japanese brand led to high targets, significant overtime and increased pressure to work faster than ever before. In bankruptcy proceedings Jaba Garmindo owners citing the practices of their buyers as a significant factor in the factories’ closure.

Dila, a former Jaba Garmindo worker says: “I know Uniqlo. It is an expensive brand. But we, who sewed the clothes, were paid very low. [Uniqlo] don’t know how long we had to work to sew their products. All they knew was setting targets to meet the order. They didn’t know how management pressured us, forced us, yelled, shouted, cursed us. All [Uniqlo] knew was that we finished the order right on time and the export went well.”

In April 2014, UNIQLO was contacted by labour rights activists following reports of labour violations including unlawful termination of pregnant workers, unpaid overtime, health and safety hazards, and trade union harassment at Jaba Garmindo. Around the same time that these disputes became known, UNIQLO stated it had decided to withdraw production from the factory as a result of “quality issues.” Final production was completed for the Japanese brand in October 2014. In January 2015 workers reported that wages were no longer being paid on time, by April 2015 the company had gone bankrupt, leaving workers unemployed and without the wages and severance they were owed.

Workers fought hard to ensure that they were listed as priority creditors in the bankruptcy proceedings and as a result received almost half of what they were owed. Without any further options for receiving their money from their employer, workers are asking UNIQLO to step in and ensure they receive the money they desperately need to be able to pay off past debts and invest in a new future..

Rohayati, 49, an ex-Jaba Garmindo worker says: ¨My son had to leave his school because we didn’t have the money to pay his school. We had to move from our rented house to a smaller and cheap rent house because we were no longer able to pay the rent. I can’t even take care of my sick mother.¨

Dila, Rohayati and their colleagues, along with their supporters around the world are now calling on Uniqlo – which last year saw their profit rise by 38% - to make sure the former Jaba Garmindo workers are paid what they are owed. In taking such action UNIQLO would join many other global brands – including H&M, Nike, adidas and Walmart – who have provided workers with unpaid severance following a bankruptcy and factory closure.

Samantha Maher from Clean Clothes Campaign says: “Uniqlo is desperate to be known as an important and influential player in the fashion industry. It wants to be Japan’s answer to H&M. However, such recognition brings with it an expectation of responsibility. UNIQLO needs to show it is serious about such an international status by immediately agreeing to meet with and negotiate a settlement with Dila, Rohayati and their colleagues.”