by christie — last modified 2018-07-05 08:06
Since 2015, 2,000 laid-off Indonesian workers who made clothes for UNIQLO and other companies have been waiting for USD 5.5 million of unpaid wages and severance pay. That must make Roger Federer – known for his sense of fairness – cry as much as it does us. That is why at www.hello-roger.ch/en fans and activists are calling on the tennis star to join an urgent international action to make his new sponsor change its stance. Public Eye and Clean Clothes Campaign are criticizing UNIQLO for failing to live up to its social responsibility towards the affected women and men by refusing to negotiate with Indonesian trade unions over compensation for former factory workers. 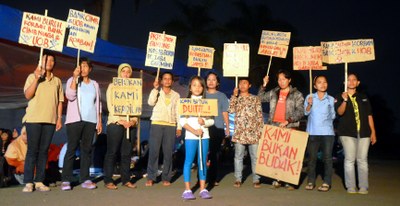 2,000 seamstresses (80% of whom are women) were made redundant when international brands suddenly cut their orders and the factory went into bankruptcy shortly afterwards. In the insolvency proceedings, their right to salary and compensation payments were recognised, but the USD 5.5 million is still outstanding. Alongside UNIQLO, other companies that the factory produced clothes for and who also have a responsibility, include s.Oliver, Gerry Weber and Jack Wolfskin.

Over the past three years, the workers of Jaba Garmindo have been fighting tirelessly for their rights. The right to severance payments in the event of mass redundancies is recognised in international agreements and Indonesian law. Large multinational companies are thus expected to act pre-emptively to assess and mitigate the possible negative consequences of withdrawal from a factory. In the case of Jaba Garmindo, UNIQLO did not even inform the factory’s official trade unions of the planned withdrawal.

In the official welcome note for his new brand ambassador, UNIQLO founder and CEO Tadashi Yanai emphasizes that Federer and him are united by the goal of "making positive change in the world. I hope together we can bring the highest quality of life to the greatest number of people.” This message could and should now be followed up by Mr. Yanai in Indonesia. Roger Federer would certainly thank him. And the 2000 workers waiting for their compensation even more so.