by christie — last modified 2020-08-10 09:51
The International Trade Union Confederation (ITUC), the Clean Clothes Campaign (CCC), and the HEC-NYU EU Public Interest Clinic have today filed a formal complaint with the European Ombudsman. The labour rights organizations claim the European Commission is not taking into account its human rights obligations regarding trade policies towards Bangladesh, and is not transparent about doing so. 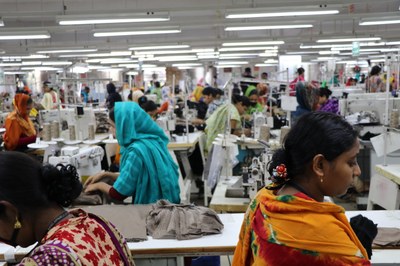 Bangladesh benefits from preferential tariffs on its exports to Europe under the EU’s Generalised Scheme of Preferences (GSP), an EU instrument which was enacted to encourage sustainable development in beneficiary countries. The GSP requires those beneficiary countries to maintain certain labour standards and to respect human rights. As a UN classified least developed country, Bangladesh benefits from the most favorable regime under the GSP, the “Everything But Arms” arrangement (EBA). As the name suggests, the EBA scheme grants duty-free and quota-free access to the EU Single Market for all export products except for arms and ammunition. Bangladesh is the most significant beneficiary of the EBA, and the EU is Bangladesh’s primary trade partner. The Ready-Made-Garment industry accounts for a large majority of Bangladesh’s exports and employs four million workers.

Bangladesh has committed serious and systematic violations of fundamental workers’ rights. Conditions are unsafe for millions of workers in Bangladesh. Additionally, the labour laws of Bangladesh create significant obstacles to the exercise of the right to freedom of association, to organise and to bargain collectively. Further, the government has not effectively enforced even these flawed laws, and workers complaints to authorities are routinely ignored. Without bargaining power or legal recourse, workers have been forced to live in extreme poverty.

The European Commission has urged Bangladesh to improve conditions, but has not launched a formal investigation concerning Bangladesh's GSP status, while the GSP would provides a very powerful tool for the Commission to ensure that economic development does not leave workers behind. Furthermore, the Commission has failed to create a transparent and objective process for deciding when an investigation should be launched, making it impossible for NGOs or others to participate.

“The government of Bangladesh needs to stand up for working people, and not simply bow to the demands of powerful factory owners, many of whom are responsible for egregious exploitation. This complaint is aimed at getting the European Union to send a very clear message to Bangladesh, in line with the commitments the EU itself has made,” said ITUC General Secretary Sharan Burrow.

Ben Vanpeperstraete, Lobby and Advocacy Coordinator of Clean Clothes Campaign (CCC) adds “The Government of Bangladesh has had ample opportunity to make tangible, practical and concrete improvements for workers rights. It is time that the EU shows that it does not stand by on the sides of labour rights violations and that its preferential trade system is a fair, dynamic and targeted system which truly aims to supporting the improvement of human and labour rights in beneficiary countries.”

“As Bangladesh’s largest trade partner, the EU has a responsibility to ensure that the workers who make European’s clothing are operating in safe factory conditions. Launching an investigation will not lead to an automatic cut-off of Bangladesh’s trade privileges – instead, it shows that Europe is committed to upholding labour standards fairly and consistently,” said Paige Morrow, Executive Director of the HEC-NYU EU Public Interest Clinic.