While millions of people are getting ready to cheer their favorite teams during the Football World Cup, a report by Éthique sur l’étiquette and Clean Clothes Campaign, ‘Foul Play’, reveals that adidas and Nike, major sponsors of the global event, pay poverty wages to the thousands of women in their supply chain that sew the football shirts and shoes of players and supporters. 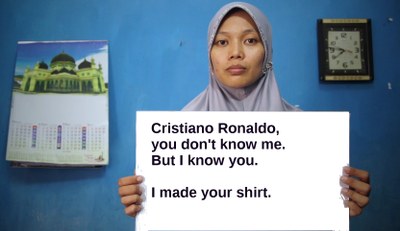 The World Cup is the main stage for adidas and Nike’s intense competition for sponsorships. Together they sponsor 22 out of the 32 teams. Over the last decade, budgets for marketing and sponsorships have doubled in value. In a record-breaking new contract, the  German team will even receive 65 million per year from adidas until the next World Cup, which is three times as much as under the previous contract that expires this year. The French national team negotiated a no less astonishing 50.5 million sponsorship with sports giant Nike.

Workers’ wages in the supply chain of the same brands do not follow this upward trend. The new Foul Play report, published today, compares the current production costs of Nike and adidas sport shoes with those of 25 years ago. The share of these costs that ends up in a workers’ pocket is now a staggering 30% less than in the early 1990s.

Much of these brands’ sportswear is produced in Indonesia where 80% of garment workers are women and earn between 82 and 200 euro per month. Their wages often do not even cover basic needs, and is much less than would enable them and their families to have decent lives, which according to calculations by Asia Floor Wage would amount to 363 euro. Some of these do not even receive their legal minimum wages. Unions and civil society are therefore calling on adidas and Nike to ensure living wages throughout their supply chain. If Nike and adidas would have kept their sponsor contracts at the 2012 levels instead of increasing them to unprecedented levels, they would have saved enough money  to cover living wages for the workers in their main production countries China, Vietnam, Indonesia and Cambodia. Instead, these brands decided to spend their money on football players rather than the workers stitching their shirts and shoes.

Both brands could start setting this right in Indonesia, where an agreement to tackle the wage issue should be within reach. In 2011, after years of international campaigning of workers and sports’ fans alike, the ground-breaking Indonesian Freedom of Association Protocol covering workers’ trade union rights was signed between adidas, Nike and four other sportswear brands, major supplier factories and trade unions. The signatories also agreed to start negotiations about two other labour rights issues identified by the unions in the future: wages and precarious employment. However, ten years since the start of the negotiations in 2008, the sportswear brands refuse to continue the process.

Éthique sur l’étiquette and Clean Clothes Campaign, together with the Indonesian unions, remind adidas and Nike that they promised to address these two labour issues in negotiations with the unions and urges them to quickly work towards a similar agreement to make sure that all the workers in their supply chain in Indonesia will receive a living wage.

Raja, an Indonesian trade unionist, states: "We demand a new protocol on wages. Brands should change their buying  practices because they affect the working conditions. Knowing that the labour cost of a t-shirt produced in Indonesia is hardly 1% of the price, it seems logical to me that the labour cost can be increased a bit, right? But the sportswear brands until now refuse to engage."