by neva — last modified 2018-12-10 08:55
In a letter to H&M's Head of Sustainability the "Turn Around, H&M!" campaigners pointed out the different ways in which the response to CCC's public letter sent in March was unsatisfactory. Campaigners once again called for concrete data and expressed the expectation that H&M will yet live up to its commitment that 850,000 workers would be paid a living wage this year. 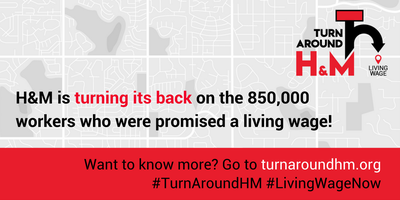 Thank your for your elaborate reply to the public letter we sent on 19 March 2018.

We are glad to read that H&M also sees the lack of living wages as one of the most pressing issues that the garment industry is facing. Working towards living wages is a top priority for Clean Clothes Campaign and brands’ acknowledgement of this issue's relevance is a starting point for change. Therefore we welcomed H&M’s living wage commitment in 2013 - despite its shortcomings, which we publicly addressed.

Five years later it appears that H&M took a lot of credit for its original commitment but has so far failed to deliver in the form of an actual payment of living wages to the workers in its supply chain. That is the core reason for the launch of the “Turn Around, H&M!” campaign, which is gaining momentum across Europe and more broadly.

The letter that we sent in March included five clear demands, and we are disappointed that your reply made no effort on several points:

(1) to provide detailed information about the Living Wage pilot projects;

and 3) to specify, based on your definition of a living wage, minimum acceptable wage levels for all your production countries.

We insist that H&M's must make this information publicly available, and we will not allow for the lack of transparency in this regard to go by unnoticed.

At face value, you did address our fourth demand, which referred to existing living wage initiatives such as ACT. However, the lengthy general explanation of ACT did not bring any details on your concrete efforts and on actual progress made so far, which was the gist of our demand.

Although we would, of course, very much welcome any industry-wide collective bargaining agreement on freedom of association and on wages in Cambodia, Turkey or Bangladesh, we have not yet seen concrete results on workers’ pay slips.

The original road map made a concrete commitment to deliver a living wage to 850,000 workers by 2018, and H&M has the responsibility and the ability to make that happen, regardless of the complexity of achieving industry-wide change.

The fifth demand, which also was not met, was for you to provide a detailed cost breakdown of the pricing structure.

H&M’s purchasing practices directly affect suppliers’ ability to pay out a living wage, and H&M itself appeared to recognize this in 2013. The road map states H&M’s commitment to “securing that we pay a price which enables our suppliers to pay their textile workers a fair living wage”. We realize that some factors are beyond individual brands’ control and commend you for working together with other brands on addressing those. However, paying high enough prices to suppliers is something that every brand is directly responsible for. We would like to know if H&M has undertaken any serious efforts to live up to this commitment.

Your letter mentions that workers employed in factories where your Wage Management System has been put in place are earning significantly higher wages than workers employed in factories where this system has not been put in place. We must note those “significantly higher wages” than elsewhere can still be poverty wages in real terms, and we have not seen any concrete data that would show this is not the case.

We are looking forward to your follow-up with concrete information, as specified above, and we – along with nearly 100,000 people who have already signed our petition – still expect that H&M will live up to its widely publicized commitment that 850,000 workers will be paid a living wage this year.