by christie — last modified 2019-09-02 14:36
Contributors: 13f11af8dd02495ebe4dcf89231e1fc9
As of yesterday, Saturday 19 May, survivors and families that lost loved ones at the Ali Enterprises fire of 2012 will receive pensions out of a fund financed by the factory’s main buyer, German retailer KiK. The process was lengthy – the families had to wait for more than six years -, but the outcome is ground-breaking. In a global precedent for the garment industry, the families will receive life-long pensions matching international standards as set by the International Labour Organisation (ILO). 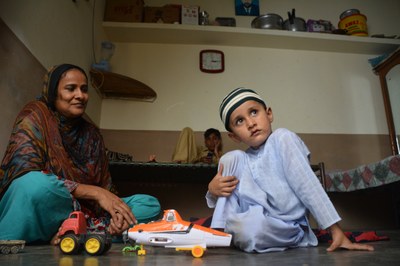 The beneficiaries all lost family members or were injured themselves at the deadly fire in the Ali Enterprises factory in Karachi, Pakistan, on 11 September 2012, which killed over 250 garment workers. The factory produced clothes for German garment company KiK, which paid one million USD in immediate relief shortly after the fire. It however took four more years of campaigning and negotiation before KiK signed an agreement on long-term compensation. In September 2016, on the eve of the fifth anniversary of the fire, KiK agreed to pay 5.15 million USD into a fund that would provide for pensions for the affected families.

The Ali Enterprises agreement is ground-breaking in many respects. Contrary to earlier large-scale compensations in the garment industry, this arrangement was set up in order to pay life-long pensions in full alignment with ILO Convention 121 on employment injury benefits. This however also meant that the processes of preparation, calculation, the setting up of a fully representative oversight committee, the distribition process and the finding of a solution that respected national circumstances and met international standards were pioneer work, which involved many domestic and international partners. This further lengthened the process. Yesterday, finally the Sindh Employees Social Security Institution (SESSI) started the disbursements of the pensions, starting of with a payment of accumulated entitlements.

Saeeda Khatoon, Chairperson of the Ali Enterprises Factory Fire Affectees Association, who lost a son in the fire, hailed the finalization of disbursement process: “The long-term compensation will grant relief to victims’ families, who were going through unbearable hardship. I am grateful that the Pakistani labour department, SESSI and the Sindh government took interest in our cases and prioritized making compensation possible.”

Nasir Mansoor, deputy general secretary National Trade Union Federation Pakistan (NTUF) says: “This is a historic moment. The families affected by the Ali Enterprises fire are compensated in line with ILO compensation standards. This will set a precedent to be followed in the future. International support from the ILO, IndustriALL Global Union and Clean Clothes Campaign were instrumental to make this agreement on long-term compensation possible. Now, it is high time to start recognizing the fundamental right to a safe and healthy workplace in Pakistan, to prevent any future factory incidents.”

Indeed, in the meantime, other workers in Pakistan continue to be at risk in unsafe garment factories. The Ali Enterprises fire is one of the most pressing examples of how the business practice, based on corporate social auditing, has failed to make factories in the garment industry safer. The factory was granted SAI8000 certification only weeks before the fire by private auditing company RINA, which has never acknowledged any responsibility for the tragedy.

Says Karamat Ali, executive director of the Pakistan Institute of Labour Education and Research: “Now that the Ali Enterprises families will finally receive their pensions, it is time to take into account the other lessons learned and look at the future. The Ali Enterprises fire painfully shows the urgency of the establishment of credible and accountable inspections that conform with international standards and are embedded in a system that is suitable to the national situation.”

An overview of the process is available in this time line.