by christie — last modified 2019-09-02 14:36
Contributors: 13f11af8dd02495ebe4dcf89231e1fc9
As H&M’s shareholders are gathering in Stockholm for their annual meeting (AGM), the growing international coalition behind the “Turn Around, H&M!” campaign is drawing attention to the fact that H&M is on course to let down hundreds of thousands of workers who have been waiting for a living wage. 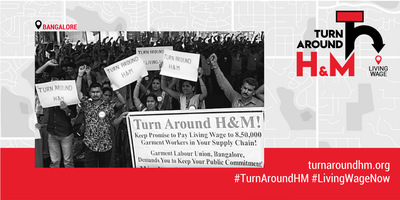 Back in 2013 H&M announced that 850,000 workers would be paid a fair living wage by 2018. Instead of that materializing on workers’ pay slips, however, the goal itself has disappeared from H&M’s corporate communication, just as the original documents have disappeared from the brand’s website. H&M corporate communication now refers only to the introduction of the Fair Wage Method by supplier factories. The 850,000 workers and their actual incomes are no longer a part of the picture.

The proposal to discuss the unfullfiled living wage commitment at the AGM on 8 May as part of the formal agenda was not taken on board. That is despite the fact that H&M benefited from the positive reception of that commitment in the media and among the socially conscious consumers; failing all those workers would undoubtedly harm H&M’s reputation. That is something that shareholders would typically be wary of, even if the company reports a 2.6 billion USD profit, as H&M did for 2017.

Clean Clothes Campaign has repeatedly, yet unsuccessfully, called upon H&M to clearly state a living wage benchmark and to publish other concrete information that would enable a meaningful assessment of efforts in the area of living wage. Dominique Muller of Labour Behind the Label (Clean Clothes Campaign UK) said: “A brand that is shouting its supposed commitments off rooftops and is receiving a lot of credit for this must clearly and publicly demonstrate measurable and verifiable progress towards real change. What H&M keeps presenting us with instead is a lot of vague, opaque and ultimately meaningless posturing.”

A recent illustration of the tendency against transparency are wage figures for selected countries that H&M presented in April. They are focusing on the difference between the minimum wage – which is nowhere near any credible living wage benchmark – and the higher average wage at H&M supplier factories. There is no information on whether those wages include various bonuses, but research conducted at H&M’s suppliers in Cambodia in 2016 revealed that almost all compensation beyond the minimum wage is related to conditions such as working overtime on Sundays and public holidays.

Anannya Bhattacharjee of Asia Floor Wage Alliance (AFWA) also warned against taking H&M's wage figures for granted: "Based on my contacts with workers, I think that H&M's figures are inflated and misrepresented. They likely include payments that should not be a part of the wage calculation." Bhattacharjee also pointed out that AFWA unions approached H&M in 2016: "The idea was to meet and negotiate an arrangement for progressive payment of a living wage. Instead of acting on that initiative, H&M opted for hiding behind non-transparent experiments of their own."

Even if the figures published by H&M are taken as a reference point, it is clear that workers' earnings are a fraction of what would constitute a living wage. In Cambodia, for instance, workers are paid on average 199 USD according to H&M, and that is above the national minimum wage. However, a living wage according to the AFWA benchmark would be 475 USD. In Indonesia H&M reports the average wage of 177 USD, while AFWA living wage estimate is 422 USD. In Bangladesh, H&M’s reported figure is 95 USD, but a living wage would be nearly five times as high (448 USD). In Bangalore, India’s garment industry hub, workers reportedly take home 133 USD per month, while AFWA estimate of a living wage is 335 USD.

It is no wonder that many workers have already joined the ‘Turn Around, H&M!’ campaign. In Bangalore about 1,500 of them participated in the international launch on 1 May. The public rally was organized by the local Garment Labour Union. Its president Rukmini Vaderapura Puttaswamy explained: "We have been invited to talks about fair living wage, and heard about a grievance mechanism, elected committee formation, workers training, etc. The result was zero! It clearly shows H&M's fake morality. That is the fundamental reason why we enthusiastically launched the campaign, and we will not stop campaigning until H&M fullfils their living wage promise."

The picture does not look any better in Europe. “We have recently spoken with a number of workers making H&M clothes, and without exception they are earning much, much less than what they would need to be able to cover basic needs and for themselves and their families to have decent lives,” said Bettina Musiolek, coordinator of the Clean Clothes Campaign's European Production Focused Group.

H&M reports that it sources from 1,668 factories around the world, and that supplier factories employ over 1.6 million workers. The company’s business practices directly affect yet more people. “If you consider the whole process that it takes for a piece of H&M clothing to be made and to then reach a consumer in a shop or at home, we are talking about millions of people. While our campaign was triggered by H&M turning its back on an explicit commitment regarding 850,000 textile workers, we must not forget everyone else who is exploited in H&M’s supply chain,” said Deborah Lucchetti of Clean Clothes Campaign Italy.

The ‘Turn Around, H&M!’ campaign will make sure that H&M's attempts to run away from the original commitment do not go unnoticed. Even though this did not make it to the formal agenda of the shareholder meeting, a group of activists is traveling to Stockholm to remind everyone in attendance that the 2.6 billion USD in profit is more than enough to end the scandal of poverty wages in H&M’s supply chain without further delay.