by neva — last modified 2018-12-10 08:57
Clean Clothes Campaign is dedicating this year’s International Labour Day to the hundreds of thousands of workers who produce garments for H&M. They are waiting for the brand to stop turning its back on the commitment that living wages would become a reality by 2018. 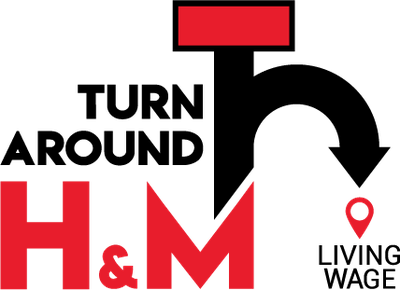 Starting on 1 May and continuing throughout 2018, Clean Clothes Campaign (CCC) is placing the spotlight on H&M. We are asking the brand to turn around and stop heading in the direction of letting down 850,000 workers who are waiting to start receiving living wages – as H&M vowed they would by this year.

In its 2013 “Roadmap towards a fair living wage” H&M announced: “H&M's strategic suppliers should have pay structures in place to pay a fair living wage by 2018. By then, this will reach around 850,000 textile workers.” (emphasis added) At the time, those workers were toiling away in 750 factories that produced 60% of what stacked H&M’s shelves around the globe.

The brand’s public commitment to ensure workers receive living wages, and the associated roadmap, received a lot of positive media coverage in 2013, along with cheers from countless consumers who care about sustainable fashion. Clean Clothes Campaign, however, was only cautiously optimistic and expressed disappointment because the roadmap failed to state a living wage benchmark, among other issues.

“By now it is clear that our skepticism was well justified. More than four years after H&M published the roadmap, hundreds of thousands of workers producing H&M’s garments are still not receiving living wages. According to H&M’s own figures, workers producing their garments in Bangladesh, for example, reportedly earned 95 USD per month in 2017. Contrast that with Asia Floor Wage living wage benchmark for Bangladesh: roughly 448 USD. It is also obvious to anyone who has followed this as closely as we have that H&M is now trying to cover up the original commitment altogether,” says Ineke Zeldenrust of Clean Clothes Campaign.

Indeed, instead of fulfilling the commitment, H&M has watered it down yet further. According to the brand’s latest sustainability report, the aim is now for supplier factories to use the Fair Wage Method. Whether or not this actually leads to the workers being paid a living wage by 2018 is not addressed at all in the report. Furthermore, H&M has seemingly purged its website of the documents that specified its original commitment back in 2013.

H&M certainly has the financial means and other resources to live up to the commitment, and to ensure that living wages are paid to the workers. All that H&M is lacking is the political will to do it.

The fact that H&M benefited from the mere proclamation of the commitment but then turned its back on it and proceeded to methodically cover it up is what drives the “Turn around, H&M!” campaign. A yet stronger driver is the fact that H&M certainly has the financial means and other resources to live up to that commitment, and to ensure, without further delay, that living wages are paid to the workers. All that H&M is lacking is the political will to do it.

"There's a small window of time left for the company to keep its promise to the workers in its supply chain, and H&M consumers will be watching closely to make sure the company doesn't back out of its pledge," said Judy Gearhart, executive director of International Labor Rights Forum. "H&M made an ambitious pledge five years ago to be an industry leader on wages, and now they need to commit the resources to make that happen."

H&M's current practice: stocking shelves on the backs of workers who have to constantly worry about how they will feed their families, keep a roof over their head, send their children to school, pay for doctors' visits and cover other basic needs.

Together with the International Labor Rights Forum and other international partners, Clean Clothes Campaign will be making sure throughout the year that consumers are aware of H&M's 2013 living wage commitment, of the brand's ability to fulfill it, and of the current practice: stocking shelves on the backs of workers who have to constantly worry about how they will feed their families, keep a roof over their head, send their children to school, pay for doctors' visits and cover other basic needs.

Visit turnaroundhm.org for more information on the campaign and suggested ways to add your voice.