Five years on, Clean Clothes Campaign commemorates Rana Plaza workers and calls for a recommitment for meaningful change in the garment industry

by christie — last modified 2018-04-26 08:29
Today five years ago, the Rana Plaza building in Bangladesh collapsed. Thousands of workers at their sewing machines in the five factories that the building housed were buried in the collapsed structure ‑ 1,134 of them died, thousands more were injured. On this day our thoughts are with the families who lost loved ones five years ago and with the survivors that have to live with the memories of that dreadful tragedy. 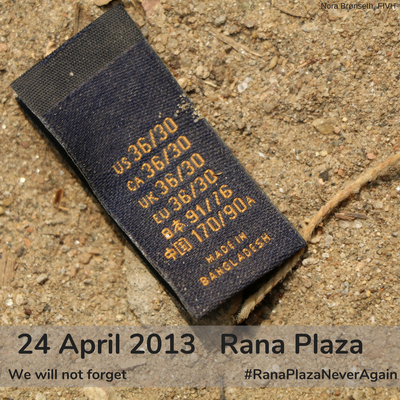 This day has become a harrowing symbol of workplace deaths in the garment industry in general. Clean Clothes Campaign therefore today also expresses solidarity with the families of the many workers that died and were injured in factory incidents ‑ fires, explosions, collapses ‑ since 2013. As none of these incidents had the scale of the Rana Plaza collapse, these workers' fate has not received the same amount of international attention and outcry. For the workers in the Rana Plaza building, despite the international spotlight which followed the disaster, it still took considerable campaigning and international pressure on garment brands for a compensation scheme to be established. The workers affected by small-scale incidents following the Rana Plaza disaster have not been able to similarly access such international pressure and campaigning. That means that while the workers of Rana Plaza had to wait for two years to receive compensation, there are hundreds of workers still waiting to receive full and fair compensation ‑ some for almost five years. Clean Clothes Campaign urges the government of Bangladesh, with the support of the ILO and brands sourcing from Bangladesh, to fulfill the pledge for meaningful change that followed the Rana Plaza disaster by taking immediate action to establish a national employment injury insurance system according to international standards in Bangladesh. While delivering such a scheme under national legislation will take time, in the immediate interim the Bangladesh government must implement a bridging solution to cover those affected by factory incidents, which have occurred in the last five years since the Rana Plaza disaster.

Most importantly, new factory tragedies need to be prevented. We would like to reiterate that there is only one credible way for garment brands to ensure that the workers in their supply chain can work in safe factories: by signing the 2018 Transition Accord. Clean Clothes Campaign urges all apparel and home textile companies sourcing from Bangladesh to join the ranks of the Accord and to leave behind non-binding alternatives without worker participation. We call upon those brands that already signed the 2018 Accord, to extend its protection to more workers in their supply chain, by adding their factories for home textile and knit and fabric accessories to the monitoring activities of the Accord.

Ben Vanpeperstraete, Lobby and Advocacy Coordinator at Clean Clothes Campaign, says: "The Bangladesh Accord clearly shows that when brands are being held accountable for human rights in their supply chains, the progress is tremendous. However, garment workers across the world are still waiting for living wages, safe workplaces and freedom from fear. It is now time to learn from the Bangladesh Accord and propose accountability for more than just Bangladesh and covering more than just safety. It is time for the European Union to answer the call for a mandatory due diligence for the garment sector."

Today is a day for the world to recommit to the promise that we can not allow a tragedy like the Rana Plaza collapse to ever happen again. All stakeholders involved in the garment industry in Bangladesh must take responsibility to create and maintain the structures able to prevent it.

Read here our background paper on what happened in the five years since the Rana Plaza collapse.

Find our position paper on the need for an employment injury insurance scheme in Bangladesh here.