Five years after Rana Plaza, the need for the Bangladesh Accord persists

by christie — last modified 2018-04-18 15:50
On the eve of the fifth anniversary of the Rana Plaza disaster that killed 1,134 workers, global trade unions and labour rights organizations are calling on all brands sourcing from Bangladesh to take responsibility for workers making their products by signing the renewed Bangladesh Accord on Fire and Building Safety. 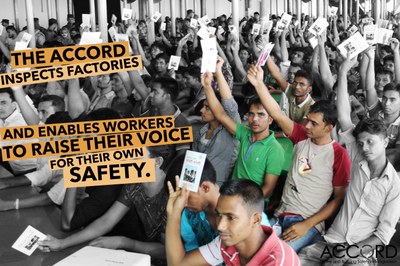 The 2018 Transition Accord takes over the work of the current Accord when it expires in May and will ensure that work continues to improve factory safety – the remediation progress rate across all currently covered Accord factories is 84 per cent.

IndustriALL Global Union Assistant General Secretary, Jenny Holdcroft, stated: “Brands that don’t sign the 2018 Accord are getting a free ride from the brands that do, benefiting from being able to source from safer factories without contributing to the joint effort. Support for the Accord is critical while there is still no effective national regulatory body in place that can guarantee factory safety.”

The legally-binding Accord, signed between IndustriALL Global Union, UNI Global Union and 222 apparel brands, was set up in response to the Rana Plaza factory collapse in the outskirts of Dhaka on 24 April 2013. The Accord safety programme has saved lives and dramatically improved garment factory safety in Bangladesh.

UNI Global Union Deputy General Secretary, Christy Hoffman, said: “We are concerned to hear signals from Bangladesh that there is opposition to the Accord continuing its important work after May. It is clear that for many major brands, the renewal of the Accord is essential to maintaining their business relationships in Bangladesh, until the Accord work can be taken over by a credible national body.”

So far, 144 global brands have signed the new 2018 Accord, covering more than 1,300 factories and approximately two million workers.

IndustriALL, UNI and the witness signatories to the Accord -- Clean Clothes Campaign, International Labor Rights Forum, Maquila Solidarity Network and Worker Rights Consortium -- are calling on all brands sourcing from Bangladesh to sign the 2018 Accord, including brands such as GAP and Walmart that had joined the now ending Alliance for Bangladesh Worker Safety, as well as other brands that have never joined the Accord, despite continuing to do business in Bangladesh.

“The Rana Plaza collapse has shown that the traditional audits have failed workers, and that in the absence of a credible and accountable alternative, the continuation of the legally-binding Accord is needed to prevent another disaster,” said Judy Gearhart, Executive Director of the International Labor Rights Forum. “This should be acknowledged by brands that have not yet renewed their commitment to the 2018 Transition Accord and those that were part of the Alliance and followed by immediate action to join the Accord.”

Ineke Zeldenrust, International Coordinator at Clean Clothes Campaign, adds: “It is vital that existing plans to create an employment injury insurance system in Bangladesh are sped up, to ensure that if factory incidents do happen workers can count on a reliable system to provide them with compensation.”

The 2018 Transition Accord recognizes the importance of Freedom of Association in ensuring workers have a genuine say in protecting their own safety.