UN committee implores Bangladesh to step up its game on wages, labour rights and compensation

by paul — last modified 2018-04-05 14:57
The United Nations Committee on Economic, Social and Cultural Rights has this week urged the government of Bangladesh to ensure a decent wage for all workers, to revise its labour laws and to make haste with the adoption of a national employment injury scheme. 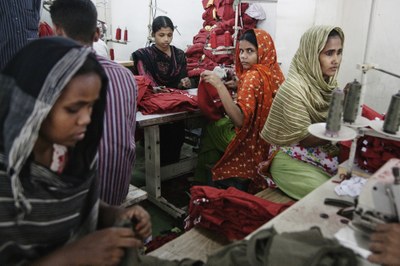 The Committee on Economic, Social and Cultural Rights consists of elected experts that consider self-assessments submitted by states on their compliance with the International Covenant on Economic, Social and Cultural Rights. The committee assessed the submission by the Bangladesh government on 15 and 16 March and this week came with its conclusions.

These conclusions contained strong recommendations to improve workers’ rights in the country, in the field of wages, labour legislation and employment injury insurance. The committee strongly recommended that Bangladesh “raise its minimum wages to ensure a decent living for all workers and their families” and to reduce the gender pay gap. At this moment the minimum wage for workers in the garment industry, in majority women, is a mere 5,300 BDT per month (about 52 €), while unions are demanding a tripling to 16,000 BDT.

In the field of labour legislation, the committee concluded that the Bangladeshi government should “revise the Bangladesh Labour Act” to ensure that its labour laws cover the whole industry, including the informal economy and Export Processing Zones (EPZs). The committee calls for independent and effective labour complaint mechanisms and strengthened labour inspection mechanisms and for a revision of procedures and requirement for trade union registration. At the moment requirements are overly restrictive, while the registration process is arbitrary and rejection rates are high. The committee furthermore recommends that the government “promptly and thoroughly investigate all reported cases of discrimination, harassment, intimidation and dismissal against trade union activists and effectively guarantee trade union rights; and bring the perpetrators to justice and provide victims with adequate remedies.”

To ensure that workers involved in workplace incidents receive proper compensation and treatment, the committee urges the government of Bangladesh to speed up its commitment to adopt a national employment injury insurance scheme to “ensure that all victims of occupational accidents and their families are provided with adequate compensation, which should include, as a minimum, necessary medical treatments for their physical injuries and psychological trauma.” Since the deadly Rana Plaza collapse workers have continued to be killed and injured in over 100 smaller workplace incidents, but in absence of a national employment injury scheme they have largely remained uncompensated. The government of Bangladesh committed to creating such a national scheme in 2015 to be established until 2020. For the sake of the families involved it is vital that the government makes haste in create and implementing such a system.

Ben Vanpeperstraete, Lobby and advocacy coordinator for Clean Clothes Campaign, states: “The Committee on Economic, Social and Cultural Rights’ conclusions confirm many of the concerns and demands raised by the ILO, Global Unions and Human Rights Organisations about the lack of progress in Bangladesh. Workers are in dire need of wages they can actually live from and those involved in factory incidents cannot continue to wait in dire poverty for compensation. Furthermore it is high time that the Bangladesh government make good on its commitments to improve its labour legislation and guarantee workers’ right to join or form a Union of their own choice. The international community including the EU has to stop standing at the side and watch while Bangladeshi workers can't enjoy even the most basic rights.”