by mirjam — last modified 2017-11-08 15:17
Today, a global coalition consisting of labour activists and campaigners throughout Japan, Hong Kong, Europe, and the U.S., joined garment workers in Indonesia, renewing calls on Uniqlo CEO Tadashi Yanai to fulfill the debt owed to workers after the Jaba Garmindo garment factory suddenly closed in 2015. 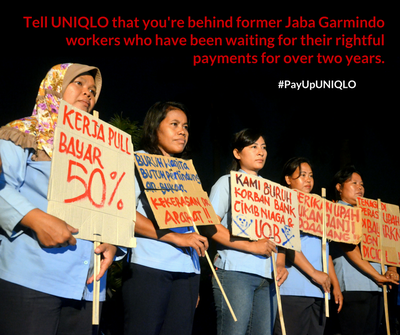 “It’s plainly unjust that workers who made Uniqlo clothes suffer needlessly, while the Uniqlo brand continues to grow and thrive, generating billions in profits. The money we are owed, we earned over years of working hard to make Uniqlo clothes, and to refuse to pay us is tantamount to wage theft,” says Teddy Senadi Putra, of Labour Union PUK SPAI FSPMI at PT Jaba Garmindo.

In April 2015, two Jaba Garmindo factories in Indonesia suddenly closed without paying legally required severance and several months of wages to its mostly women workforce. The factory closures and subsequent bankruptcy was preceded by its major buyers, including Uniqlo, cutting off orders without warning or explanation to the thousands of workers employed there.

Rulings by the Indonesian Manpower office determined that the workers at the Chipuka factory, where the union has been organising, are owed at least $5.5 million in unpaid wages and severance pay. Prior to 2015, workers at the Jaba Garmindo factory reported a range of violations of Indonesian laws, including illegal contracting practices, unlawful termination of pregnant workers, unpaid overtime, health and safety hazards, and retaliation against workers engaging in union activities.

“There is absolutely no question that Uniqlo is obligated under its own codes of conduct, as a member of the Fair Labor Association, and by international human rights standards, to ensure the workers that made its clothes have all their legal rights respected. In this case this means they should receive all legally required compensation. It’s also quite clear that Uniqlo has the means to fulfill its responsibility. The only question is if the CEO has the moral fortitude to do what is right and finally make these workers whole,” say Sam Maher of the Clean Clothes Campaign.

In 2016, Fast retailing, the company that owns Uniqlo, made over 16 billion EUR in profits. Its owner and Uniqlo founder Tadashi Yanai has built up his own personal wealth to an estimated $16 billion, making him the second richest man in Japan and among the richest in the world.

Over 20,000 people have already signed a War on Want petition calling on Uniqlo to fulfill the debt owed the Jaba Garmido factory workers, and demonstrations took place earlier this year in Jakarta and Hong Kong. The campaigners are asking for people to join the campaign and take action in the run up to the holiday season.