by christie — last modified 2020-08-10 10:50
Today four years ago, a fire broke out in the Aswad Composite Mills textile mill in Bangladesh, killing at least seven workers and injuring over fifty. Happening six months after the deadly Rana Plaza collapse, this tragedy never received much attention, and four years on, the families and survivors still remain without full and fair compensation. On this day, our thoughts are with the families that suffered losses. Clean Clothes Campaign urges the brands that were sourcing from the factory, including H&M, C&A and Primark, to ensure that these families finally receive the compensation that they should have been provided with so many years ago. 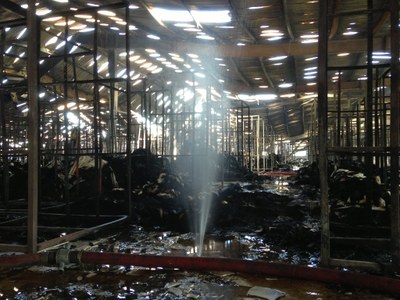 The fire occurred in a factory that was deemed unsafe by government inspectors, but which nevertheless continued to operate. It was caused by the explosion of an overheated machine on the ground floor, which set fabric on fire, trapping workers on an upper floor. Compensation offered by the factory owner fell far below that received by victims of earlier disasters, including the Tazreen factory fire and the Rana Plaza collapse.

The Aswad fire has always been overshadowed by the larger factory incidents that preceded it, such as the Rana Plaza collapse, which killed 1,134 workers. While justifiably most efforts to ensure compensation went to these larger tragedies, the plight of the Aswad families, which is no less important, has been largely ignored. In these earlier cases brands – including many of those sourcing from Aswad – did provide compensation after international pressure. The provision of such payments however should not depend on the media interest or public outcry a particular incident provokes. There are no excuses for refusing to take the same steps for these families.

Clean Clothes Campaign recognises that it is the shared responsibility of the government, the factory owners and the brands to ensure that those injured or left behind after a factory incident, such as the Aswad fire, have access to remedy and are properly compensated however great or small the number of victims. For this reason we have been calling on brands to support a more permanent solution for provision of compensation, by supporting a “bridging solution,” facilitated by the ILO, which will help bring Bangladesh closer to a national level employment injury scheme that will protect all of its workers should the worst happen. We are asking for Aswad to be the pilot case for such a scheme, which would calculate and distribute the payments contributed by international buyers, based on international standards laid down in ILO Convention 121. The same system could also be used to compensation victims of more recent tragedies, including the fires at the Tampaco factory in 2016 and the Multifabs and Ideal Mills factories earlier this year.

Thiruvalluvar Yovel (Clean Clothes Campaign) states: “The families affected by the Aswad fire have been waiting for too long already for compensation. Four years since the fire, it is high time that these brands, that made profits on the materials produced at Aswad take their responsibility for these workers in their supply chain. Money will not bring their loved ones or health back, but might at least alleviate the dire situation many of them are in since the fire.”

All families left behind after workplace incidents deserve to be properly compensated. The four year wait of the Aswad family is a heart-breaking reminder of that and Clean Clothes Campaign will continue to demand that brands take responsibility for ending their plight immediately.