by paul — last modified 2020-08-10 10:49
At least six people were killed in a textile mill fire in Bangladesh last Wednesday. Clean Clothes Campaign expresses its heart-felt condolences to the families of the deceased. 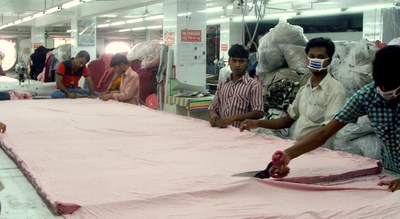 In order not to leave them destitute without just compensation for employment injury, it is imperative that brands, employers and the Government of Bangladesh step up to improve access to and provision of remedy in the short-term and by moving forward towards a permanent solution with adopting the National Employment Injury Scheme.

Local media report that a fire broke out in the Ideal Textile Mill in Munshiganj, Bangladesh, on 20 September, killing five men and one woman, who were trapped on a higher floor. This fire is only one of several deadly factory incidents in the country’s textile industry this year, with some of the most recent examples being the Multifabs Ltd boiler explosion on 3 July 2017 as well as the Pakiza Textile Ltd fire on 1 June 2017.

Despite the frequent occurrence of employment injury in Bangladesh, there is still no consistent approach or permanent solution to provide remedy for those unable to work after sustaining an injury or for the families left behind when workers are killed.  Compensation systems, using international standards and involving all stakeholders, were set up after the respectively 112 and 1,134 deaths of the 2012 Tazreen factory fire and the 2013 Rana Plaza collapse. These arrangements organized compensation for loss of income based on ILO Convention 121 and laid the groundwork for a more structural and permanent solution in the form of a National Employment Injury Scheme in Bangladesh.

The legal and institutional framework to put this national scheme in place has yet to be finalized. As a result, the remedial system for worker injury in Bangladesh remains piecemeal, unpredictable and even discriminatory at times. Compensation is often inaccessible for many workers and families affected by smaller factory incidents, which have been ignored or forgotten in the absence of sustained international attention.

Ineke Zeldenrust (Clean Clothes Campaign) states: “It’s been nearly four years since the Aswad textile factory burned to the ground in Bangladesh killing and injuring over 50 workers. Tragically, to add insult to injury, their families are still waiting for adequate compensation. Their plight shows why a bridging solution for access to remedy is urgently needed until a full-fledged national system is operational.”

Brands have an obligation to ensure access and provision of remedy as part of exercising due diligence within their supply chain. Until an employment injury scheme covering all workers has been implemented at a national level in Bangladesh, brands which placed orders at factories where garment workers were grievously injured or died in factory fires, such as H&M, Aldi, Lindex, Newbody, Dansk Supermarked, Rex Holm and Scanwear should actively support a bridging solution coordinated by the ILO, using the Rana Plaza Arrangement methodology for calculating payments and delivering benefits. As the number of intended beneficiaries is relatively small this should be a straightforward process, which can be carried out fairly quickly and easily, if political will and practical support are available. In parallel, brands should use their leverage with the Bangladesh government and their suppliers to ensure permanent and reliable access to remedy for aggrieved workers in their supply chain via the proposed national employment injury scheme.

This week’s tragic fire clearly illustrates the need to expand the Bangladesh Accord on Fire and Building Safety, which inspects and remediates factories in the garment industry, to related industries, such as textile, yarn, cloth and other related factories. This option is available in the new Accord, which will take effect in May 2018. Clean Clothes Campaign calls upon all brands producing in Bangladesh to sign the new Accord and to listing all their suppliers producing garment and textile  related products.  Full disclosure of their supply chains will help brands and retailers meet their due diligence requirements under international standards   and most importantly can save workers’ lives.