by christie — last modified 2016-09-10 16:04
Worker Rights Consortium, the International Labor Rights Forum, Clean Clothes Campaign, and the Maquila Solidarity Network respond to the explosion at the Tampaco Foils Factory in Bangladesh on 10 September 2016. 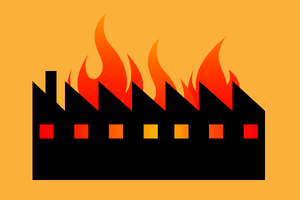 The boiler explosion and resulting fire and structural collapse at the Tampaco Foils Ltd factory in Bangladesh demonstrates the ongoing dangers to industrial workers in that country and the failure of global corporations to take meaningful steps to protect the safety of workers in their supply chains. According to its corporate website, Tampaco Foils' customers include two of the world's largest consumer products brands: Nestle and British American Tobacco. If this information is correct, the question for Nestle and BAT is why were they producing at a factory where basic safety precautions, like inspection of boilers, were not being taken. That apparent negligence gives rise to two additional questions: What steps will these corporations now take to prevent similar disasters in other overseas factories and will these corporations provide meaningful compensation to the workers injured at Tampaco Foils and to the families of those killed?

It is vital for the public to understand that boiler safety is also a key issue in Bangladesh's massive garment sector. There have been numerous boiler explosions at garment factories in recent years, including incidents in November 2014 (Shanta Expressions Ltd.: one dead, four injured), December 2015 (RN Garments: eight injured), and January 2016 (Active Zipper: two injured). There has been major progress in improving fire and building safety in garment factories in Bangladesh, especially at the 1,600 factories covered by the binding safety agreement between unions and global apparel brands known as the Accord on Fire and Building Safety in Bangladesh. However, none of the safety initiatives in the garment sector, including the Accord, cover the issue of boiler safety. Accord standards concerning fire safety address the spread of a fire caused by a boiler explosion, but they do not address the prevention of such explosions - and, in an explosion the size of the one we have just witnessed at Tampaco Foils, limiting the spread of fire will not be enough to protect life and limb. This is a major issue that the Accord, all other building safety initiatives in Bangladesh, and the Bangladesh government must address.