by christie — last modified 2017-05-17 07:16
Tomorrow, 18 May, the third annual review of the so-called "Sustainability Compact" between Bangladesh, the European Union and the International Labour Organization takes place in Dhaka. Despite optimism voiced by the EU, Bangladesh is still far from meeting its international labour rights' commitments and taking concrete steps enshrined under the Compact. A striking example is the wave of repression which the the Bangladeshi labour movement has faced since December 2016. Clean Clothes Campaign calls upon the EU, as well as brands, national governments and other stakeholders, to maintain pressure on the Bangladeshi government to improve labour conditions and comply with the Compact's demands. 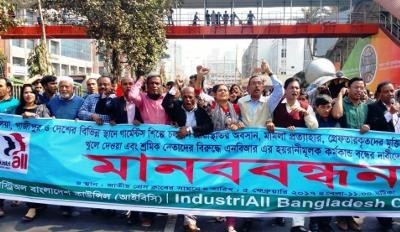 The Sustainability Compact was signed in the aftermath of the deadly Rana Plaza collapse of 2013, when the need for change in the garment industry was made painfully clear. The compact outlined concrete actions that the government would take to strengthen workers' rights.

Although EU Ambassador Pierre Mayaudon stated that Bangladesh has made fantastic progress under the Sustainability Compact, labour organizations such as Clean Clothes Campaign draw very different conclusions from experience on the ground. The dire state of labour rights in Bangladesh has become clearly evident since December 2016, when workers went to the streets of the industrial district of Ashulia to demand higher wages. Following the temporary closure of approximately sixty factories, employers dismissed thousands of workers, and over thirty labour leaders were arrested. While they have been released, charges against them are still pending. Therefore these activists still face the threat of court trials and possible imprisonment. Furthermore, the thousands of workers who lost their jobs after the strikes are still waiting for reinstatements.

Governments and brands should keep up the pressure on the Bangladesh government and Bangladeshi manufacturers to solve this crisis. Garment brands sourcing from Bangladesh should pressure their suppliers to drop all criminal charges and offer reinstatements to workers, and they should demand concrete proof that these demands have been met.

Beyond this concrete labour crackdown, the government of Bangladesh is also lagging behind on its structural commitments. These include making it easier to formalize new labour unions and ending the discrimination of union members and leaders. The government is also disregarding its committed to allow labour unions to function in the Export Processing Zones. Overall, the Bangladeshi labour law is still far removed from the core ILO standards regarding trade union freedom.

"The recent crackdown and the structural shortcomings of Bangladeshi labour policy show that three years on, the government is still far from realizing the promises made under the Sustainability Compact," states Ben Vanpeperstraete from Clean Clothes Campaign. "The European Union must not remain silent in the face of this continued failure to respect workers' rights. As we have pointed out before, an investigation into whether Bangladesh still fulfills the criteria for the "Everything but Arms" preferential trade agreement between the EU and Bangladesh would be a good way for the EU to underline the urgency of immediate labour reform."

In 2015 - after it had become clear that the Bangladeshi government had made no progress on the promised reforms - EU Trade Minister Cecilia Malmström already hinted at the option of a trade investigation. She warned that "a continuation of today's poor conditions for workers could also force the European Union to revisit Everything but Arms." A clear signal from the EU is now vital to drive further change in Bangladesh. Clean Clothes Campaign and other labour groups have therefore been calling for the EU to carry out a trade investigation.