by neva — last modified 2017-03-30 13:02
Two Indonesian trade unions organised a protest in front of the German Embassy in Jakarta today (30 March). Protesters brought attention to the responsibility that German brands s.Oliver and Gerry Weber have for thousands of workers who lost their jobs when these brands' Indonesian supplier Jaba Garmindo closed down in 2015. 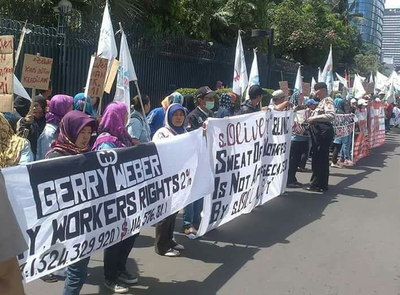 Nearly two years later 4,000 workers --the vast majority of them women -- are still waiting for four months’ worth of unpaid wages as well as severance payments, nearly $11 million altogether – an amount that was confirmed by local courts. The two German brands – s. Oliver and Gerry Weber – along with the Japanese brand UNIQLO and others that used to source from Jaba Garmindo, have been evading accountability for the fate of those workers, many of whom found themselves in a desperate situation when they lost their jobs. Clean Clothes Campaign calls on the brands to participate in compensation payments.

The factory trade unions report that both German companies that were targeted in today’s protest sourced clothing from Jaba Garmindo until the beginning of 2015, shortly before the insolvency. "We are calling on s.Oliver and Gerry Weber to finally take responsibility for their supply chain. They must give the workers what they are legally entitled to," says Laura Ceresna-Chaturvedi from the German Clean Clothes Campaign.

Many of the former Jaba Garmindo workers have not been able to find new jobs because of their age, many have lost their homes and cannot feed their families. Sri Paryani, who worked at the Jaba Garmindo factory for 20 years, and lost her job along with her husband, said: "Once again, we, the workers at PT Jaba Garmindo, demand that brands pay what we are owed because you made profits thanks to our work at Jaba Garmindo.”

According to the UN Guiding Principles on Business and Human Rights, companies are obliged to prevent violations of human rights caused by their business practices. "As multinational corporations, s.Oliver and Gerry Weber have a duty of due dilligence. This also applies to their suppliers’ employees. It is unacceptable that thousands of workers who were sewing clothes for s.Oliver and Gerry Weber go empty-handed," said Laura Ceresna-Chaturvedi.

In a similar case in Indonesia, in 2013, Adidas paid compensation to their supplier’s workers following Clean Clothes Campaign’s involvement in the case. Other companies, such as Fruit of the Loom, Nike and H&M, have also made such payments to workers in their supply chains in Honduras, El Salvador, Indonesia and Cambodia, or they made sure that the severance payments were covered by their suppliers.