Activists demand UNIQLO pay workers what they are due

by mirjam — last modified 2020-08-10 10:44
On International Women's Day a coalition of global campaigners are organising a series of actions aimed at the Japanese-owned corporation UNIQLO. The immediate goal is for UNIQLO to take responsibility for 4,000 workers in their supply chain. Protests in front of UNIQLO's stores are taking place in Hong Kong on Wednesday, running parallel to a letter petition targeting UNIQLO's CEO. 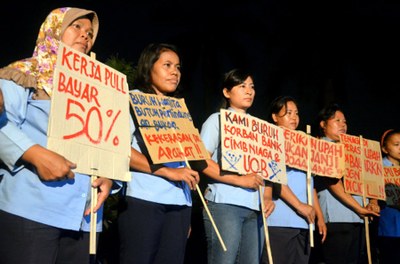 With “Women in the Changing World of Work” being the central theme of this year's International Women's Day, UNIQLO’s disregard for the fate of thousands of women who lost their jobs at UNIQLO's former supplier in Indonesia – and are still owed wages and severance payments – must be brought to public attention.

Join the letter petition, and our demand that UNIQLO provide substantial financial contribution for workers of PT Jaba Garmindo. In addition, UNIQLO must commit to paying a living wage to workers across the supply chain and guarantee that workers in UNIQLO supplier factories have the right to safely organise.

The actions are supported by Clean Clothes Campaign, War on Want, People and Planet, SACOM, Globalization Monitor and Yokohama Action Research. The protests in Hong Kong will be followed by a similar action in Japan on Saturday, 18 March.

UNIQLO, ran by the richest person in Japan, has been evading accountability for the fate of workers in Indonesia who lost their jobs when the PT Jaba Garmindo factory closed down in early 2015. The closure put 4,000 people out of work and pushed them into a desperate situation. Nearly two years later, these workers are still waiting for four months’ worth of unpaid wages as well as severance payments that altogether amount to nearly $11 million – an amount that was confirmed by local courts. “Many of the former Jaba Garmindo workers have lost their homes, or are considered too old to find new jobs, and are unable to support their families,” said Teddy Senadi Putra, of Labour Union PUK SPAI FSPMI at PT Jaba Garmindo.

Workers are owed the severance payments which should have been accrued during the period when UNIQLO was sourcing their products at Jaba Garmindo. Sri Paryani, who worked at PT Jaba Garmindo for two decades, and lost the job along with her husband, said they would continue to fight for justice: “We ask the brands that have benefitted from our sweat: take responsibility and give us what should be our right!”

While producing for UNIQLO, workers also faced unsafe working conditions, forced overtime, illegal use of short-term contracts, and some pregnant workers were reported to have been dismissed.

The vast majority – 80 percent – of the workforce at the Jaba Garmindo's facilities which closed down are women. “Because Indonesia lacks a basic social safety net for its low-income population, failure to ensure that workers receive legally owed payments has a greater impact on women and their families, leaving them in extreme hardship,” said Marta Zogbi of Clean Clothes Campaign.

The United Nations Guiding Principles on Business and Human Rights (UNGPs) are clear on the obligation of companies to “seek to prevent or mitigate adverse human rights impacts that are directly linked to their operations, products or services by their business relationships, even if they have not contributed to those impacts.” Yuen-ki Yeung of Students and Scholars against Corporate Misbehaviour (SACOM) pointed out that, “Jaba Garmindo’s bankrupcy was closely related to UNIQLO cutting off its order. As a multinational corporation, UNIQLO has to carry out due diligence in its global supply chain. That includes the workers producing clothes sold by UNIQLO.”